Third river crossing in city "is a priority" 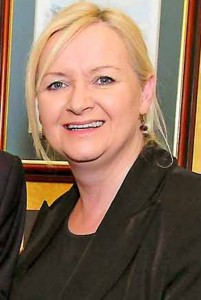 Cllr Mary Roche, who is concerned about the increased capacity levels on the Outer Ring Road

A THIRD river crossing for the city is a “priority”, according to the CEO of Waterford City & County Council.
At the local authority’s November plenary meeting, Councillor Mary Roche (Ind) sought an update on plans to construct a third river crossing in Waterford City.
She also asked for an update on redeveloping areas of the Outer Ring Road in order to cater for the large volume of traffic which uses the route each day.
She described both projects as “strategic” needs for the city and called for their delivery as soon as possible.
Cllr Roche said she uses the Dunmore Road regularly and highlighted that the area around Tesco Ardkeen “no longer operates as an Outer Ring Road”.
While she said busy traffic was a positive sign, she said there is almost no “down time” in terms of the high volume of traffic using this route. Cllr Roche asked for the redevelopment of the road network in this area to be “moved up the priority list”.
In response, Waterford City & County Council Chief Executive Michael Walsh said plans for the third river crossing in the city would be discussed in further detail in January.
He said there are a “series of options” in relation to this project and stated that this was the Council’s “priority” rather than changes to the Outer Ring Road.
At a previous meeting, Mr Walsh had indicated that the Maypark Lane area remains the preferred location for a third river crossing but said there were a number of issues to take into account such as the difficult geography of this area.