Tom Murphy:"Confidence is clearly rising in the city"

A sense of rising confidence and renewed optimism throughout Waterford is palpable: that’s the view of veteran motor dealer Tom Murphy, who has just entered into his 50th year in the trade.
Speaking to The Munster Express, the Volkswagen and Mercedes-Benz Principal Dealer said that the mood of the average customer in the showrooms he had worked in since the late 1960s has always provided a reliable barometer of public sentiment.
“There’s no question that there’s a growing level of optimism around the town” said Mr Murphy. “I gave a customer a lift back into town today (last Wednesday) – he’s a little older than me – and we were just talking about the way things are definitely a lot more positive. But, and I think this a good thing, people are far more careful than they would have been this time 10 years ago, because they’ve seen between now and then what can go wrong.”
Tom Murphy added: “In terms of cars, the single biggest thing of all that has occurred in the past 10 years is that in 2008 or 2009, someone buying a car would have visited, I would argue, seven or eight dealerships before they’d make a decision. Now they’re making a decision about a car on the basis of, maybe, one and half dealerships; they have all of their research done on the internet and they’ll probably know as much about the car as the person selling it to them – and that’s a good thing as it eliminates a lot of unnecessary time for everybody. People are doing their shopping and are better informed now when they come to buying a car, and I suspect that applies in other commercial areas as well when it comes to people making major financial decisions.” 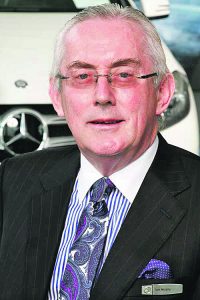 While the Society of Motor Industry in Ireland (SIMI) is predicting another solid January in terms of new registrations, news of which we ought to have in a few weeks’ time, the need to take older cars off the road remains a significant matter.
And Tom Murphy believes the Government should re-initiate the Scrappage Scheme which, back in 2010, took 17,272 older vehicles off our roads, generating €57 million for the State that year.
“The average age of a car in Ireland is still over nine years,” he stated. “And it’s very simple: there are 2.1 million cars in the Republic. And if you take last year, 2016, 15 and 14 into account, there were 470,000 new cars sold and between 2009 and 2012, there were 375,00 cars sold, which brings us up to 845,000 new car sales, meaning there are almost 1.3 million cars eight years or older making up the rest of the Irish motoring fleet. And if we’re not careful, Ireland can and will become a dumping ground for highly pollutant older diesel cars that will become worthless in the UK, and that is starting to happen already. And I feel the ‘environmental people’ are not actually taking it seriously; by this I mean cars that are banned in London and Paris already which are 10 to 12 years old are the equivalent of a car driving out of the NCT having failed, and there’s a €2,000 job required to put it right when the car is only worth €1,000: and we could end up in that scenario if Ireland becomes a safety valve for cars of that age…these cars should be written off by insurance companies and be scrapped, but insurance companies are not doing this, they’re not being honourable in that regard.”
While individual manufacturers are running scrappage schemes of their own, such schemes are not underwritten by the Government. This must change, according to Tom Murphy. “Bringing back the scheme would be a great idea – you could put an upper limit and keep it to family-type cars to a certain engine size – and that would encourage people who have paid tax all of their lives and been crucified by it – to give them a break. It would be a great way of, say, encouraging someone to buy a car for their retirement and encourage people to buy a new car, get rid of their older car and have it scrapped and then enjoy cleaner, cheaper driving in the future.”
See Pages 2 and 3 of our this week’s Munster Express newspaper for our 181 Motoring Supplement and an in-depth interview with Tom Murphy