Home » All Front Page News » General Stories » "Underfunding of the Guards is a disgrace."

"Underfunding of the Guards is a disgrace." 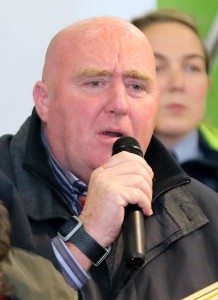 Metropolitan Mayor John Hearne (SF) has re-iterated his calls for an increase in Garda resources in Waterford given the “stress and fear” residents across the city are experiencing due to drug and alcohol-fuelled criminality.
Addressing the Waterford Women Support Network’s (WWSN) seminar on positive mental health (and connecting with those affected by suicide) at the Edmund Rice Centre, Mayor Hearne said: “it’s an absolute disgrace the way we underfund the Guards; we’ve had half the Drug Squad taken away in Waterford city due to cutbacks so we can’t prevent the problem from the very start in a great deal of cases.”
He added: “I know that every case can’t be prevented but the fact that there isn’t a fear among certain people about the consequences of peddling drugs on kids and all the trouble that that can lead to, is a big problem. I think if we put more resources in there, not only would we be reducing crime, but we’d be saving a lot of lives in the long term.”