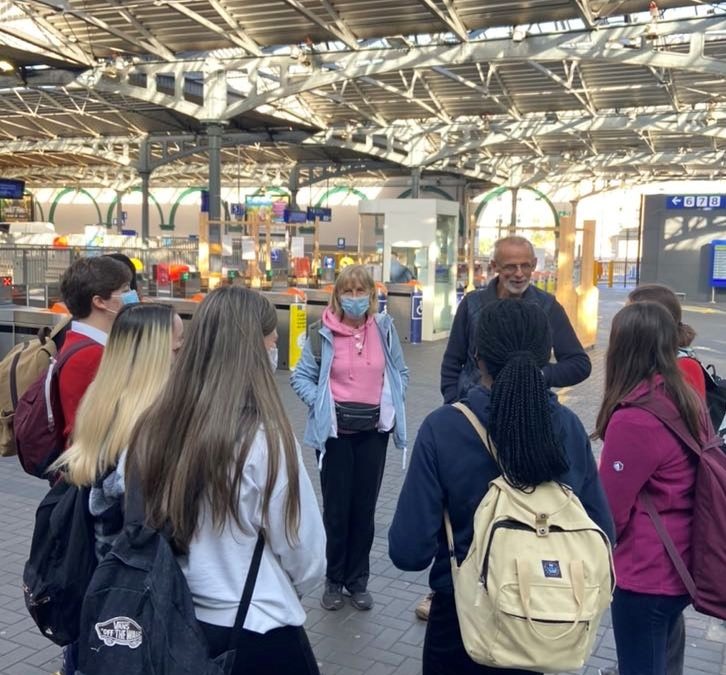 Dublin is a beautiful city, and it is amazing to look back in time. Even Queen Elizabeth II noted that “it is impossible to ignore the weight of history here.” And so, on a chilly mid-October morning, a determined group of 6th year historians from St Angela’s took the train to discover that past for themselves. It meant walking for hours around the city centre, but they were dedicated to the task.

Their tour guide and teacher, Mr Devine, led the girls around their first location, Heuston Station. It was the largest roofed space in the world. It was built one year before the Famine and is named for Seán Heuston, a young rebel who fought in the 1916 Rising. We learned that the Four Courts was seized for two months by Cathal Brugha and Liam Lynch for the anti-Treaty IRA in 1922. When the shelling forced them out the Civil War had started. Before they left, the IRA blew up the records office, burning up documents dating back to 1174, five years after the Normans landed in Ireland. 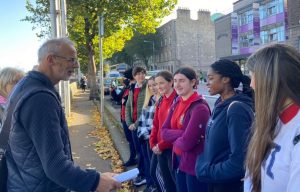 Moving down the Quays

Learning that Christ Church Cathedral is the oldest building in Dublin fascinated us. It was originally built in wood by the Vikings. Our own Strongbow is buried there.

One of our final destinations was the Spire on O’Connell Street. It was built by Radley Engineering from Dungarvan. It is seven times the height of the nearby G.P.O. It is dizzying to learn that the top will sway 5 feet in heavy winds. It replaced Nelson’s Pillar which was bombed by the IRA in 1966.

These were just some of Dublin’s many significant historical sites that we explored. The joys of this sweet break from the study halls of school will stay with us forever. Hopefully next time you are in this beautiful city, you too will stop and think about Dublin’s history.