A LOCAL dyslexia campaigner hopes that specific workshops for children with dyslexia can now be staged in Waterford. Around 80-100 people attended a meeting organised by the Waterford Dyslexia Group at the Edmund Rice Centre on January 10th.
The meeting heard from guest speakers Tanya Brady and Donald Ewing from the Dyslexia Association of Ireland. 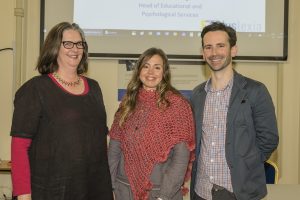 Mari Carmen Postigo of the Waterford Dyslexia Group described the talks as excellent and said she was delighted with the turnout.The talks featured an explanation of what dyslexia is; ways that parents can assist children with dyslexia; and discussed supports and accommodations which are available at schools.
The event also examined the demand for after-school dyslexia workshops in Waterford for children with dyslexia.Mari Carmen has been campaigning for such workshops (which are available in other locations) to be held in Waterford.
However, at least 25 children must be committed to attending the workshops before they proceed.
The workshops, which would be conducted by the Dyslexia Association of Ireland, will run for two hours over 12 weeks at a cost of €360 at a suitable venue locally.
As a result of the Waterford Dyslexia Group’s first talk in Tramore, around 13 children committed to attending the workshops.Following the most recent meeting, Mari Carmen is confident that there is now enough interest to enable the workshops to proceed in September. She says the workshops will support families and children, build self-esteem, and serve an important purpose in terms of social interaction.
She is also highlighting the need for a special reading unit in Waterford for children with dyslexia.
Mari Carmen said she did invite a number of politicians to attend the meeting in the Edmund Rice Centre, however none were in attendance. She would like to see more awareness of dyslexia and points out that it’s estimated around one in ten Irish people have a form of dyslexia.She is pleased that those in attendance at the recent meeting discussed experiences amongst themselves and many people also participated in the question and answer session.
The Waterford Dyslexia Group will hold a coffee morning at Ardkeen Library at 10am on February 14th. For more information, visit the group’s Facebook page.