NEW employment opportunities are to be generated in Kilmacthomas through the opening of a whiskey distillery.
Gortinore Distillery has acquired The Old Mill in Kilmacthomas with the intention of establishing a whiskey distillery and bonded warehouse for the ageing of whiskey.
The project will generate up to 35 construction jobs during the refurbishment process and 15 permanent positions will be created once renovation work is complete.
Gortinore has commenced plans to renovate and restore The Old Mill with the installation of three single pot stills.
Founder and CEO of Gortinore Aidan Mehigan told The Munster Express that he was informed about The Old Mill in Kilmacthomas by somebody who had driven through the village.
“When I first saw the mill it was considerably bigger than I thought it would be. It’s a fantastic site,” he said.
“We will hopefully break ground on the project in three to six months. From there, it’s estimated that the whole renovation will take six months to finish. We will distil on site from day one and then four years later we will have the first whiskey produced on site in Kilmacthomas.”
He hopes to complete renovations, including the bonded warehouse, tasting room and coffee shop, by the end of 2018.
He added that the “taste profile” was still being worked on.
The development of The Old Mill into a whiskey distillery and visitor centre aims to build an international whiskey brand and to attract national and international tourists.
Along with the eagerly awaited opening of the Waterford Greenway, it’s hoped that the refurbished of The Old Mill will generate increased economic activity in Kilmacthomas and Mid County Waterford.
Kilmacthomas Community Meitheal Ltd has been working at establishing a suitable enterprise at the site of The Old Mill.
Mr Mehigan paid tribute to the work of the group and said he has been working closely with its members. 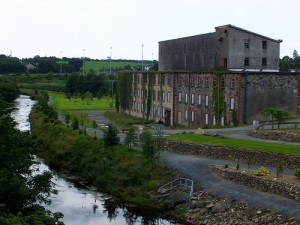 “We have been working very closely with Kilmacthomas Community Meitheal Ltd. to ensure the integrity and heritage of The Mill is prioritised and maintained throughout this process,” he said.
Along with Mr Mehigan, project principals include Denis Mehigan, Stephen O’Neill, industry consultant and former SVP of Strategy for Pernod Ricard USA and Joran Via, Master Distiller at Breckenridge Distillery in Colorado.
For more information on Gortinore visit www.gortinore.com or check out their Facebook and Twitter pages.