Waterford Institute of Technology (WIT) hopes to launch its Strategic Plan in January, The Munster Express has learned.
In an email issued to staff on Wednesday last, WIT’s Vice President for Strategy and Institutional Transformation Richard Hayes emphasised to colleagues that what has been proposed is “subject to change”. The Plan will be subsequently validated for approval by both WIT’s Academic Council and the Governing Body.
Dr Hayes said that the period between May and December has involved a major “conversation about the Institute’s core values, values that express our traditions, our beliefs as teachers and thinkers, and the expectations of our students and the external community. Reminding ourselves of these values will help in prioritising activities for the coming three years”. 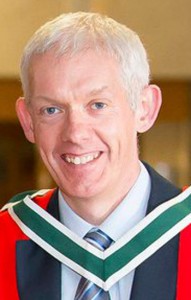 Between 2018 and 2020, WIT is aiming for:
* Collaboration and co-operation, supporting equality and diversity
* Progression and innovation, “generating both new knowledge and new ways of doing things”,
* Actively supporting regional, cultural, economic and social development, and
* Demonstrable excellence.
Regarding a “meaningful vision statement”, Dr Hayes said its articulation was “extraordinarily difficult”. The first draft of such a statement reads:
“Waterford Institute of Technology aims to be the educational, social, cultural and economic leader of the South East of Ireland, a community engaged in making and sharing knowledge, acting to improve quality of life for citizens.”
Richard Hayes said that such a plan “will be entirely irrelevant if it is not accompanied by – indeed if it is not largely made up – of an operational plan”. He added that the Strategic Plan will be “data and target driven and I am committed (in the spirit of collegiality evident in the engagement we have had to date, a collegiality that is our core value) to sharing those targets and our performance against them as we progress”.