Kieran Foley reports
In 1992, The Munster Express reported on the Terry Wogan Golf Classic which was staged at Waterford Golf Club. 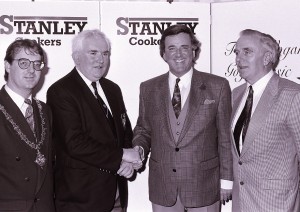 The event, which took place Saturday June 27th 1992, proved to be one of the major sporting and social events in the locality that year and was attended by a star studded line up.
Among those in attendance were sporting luminaries such as Johnny Giles, Jack O’Shea, Babs Keating, Ossie Ardiles, Tony Cascarino, Ronnie Delaney and Mick McCarty.
The total attendance was estimated at 3,000 and our report from our edition of July 3rd 1992 reported that “the weather was beautiful, the crowds huge and always good humoured and the big personalities – without exception – were pleasant and obliging in the extreme.”
A banquet was held at Jury’s Hotel later that night.
In total, the charity event raised £20,000 with the main beneficiaries being Oasis and Group Link.
The Golf Classic had been staged in Limerick the previous year, which was the first time the event was staged outside Dublin.
Our report stated that those in attendance at the Waterford event had commented that “the enthusiasm of the welcome surpassed anything displayed previously either in Limerick last year or in Dublin over a number of years prior to that”.
Stanley Cooker manufacturers Waterford Foundry were the main sponsors of the Golf Classic.
Over 220 people participated on the day, with a cost per team of £1,200 or £400 a player.
Many of the participants stayed at local hotels during the weekend, including Jurys, The Tower and Waterford Castle.
Our report on the event stated that none of the stars in attendance had any problem posing for photos or signing autographs to the delight of all of the spectators.
Many editions of The Munster Express from early 1992 featured coverage of the build up to the Wogan Classic as excitement grew in the area.
Matt Keane adds: Hours after learning of Terry Wogan’s death, I rooted out an old cassette tape of an interview I conducted with the man himself on January 31st, 1992, 24 years to the day that the Limerick-born entertainer left us. He was at Waterford Golf Club to officially launch the Terry Wogan Golf Classic, which Kieran Foley has detailed above.
Terry was in brilliant form on the night he spoke with me as indeed was Mick Lynch and John Colfer who was captain of the Waterford Golf Club at that time. Following the interview we made our way to the 19th hole (the bar in other words) and quite a number of brandies were put away and during that time in the bar Terry had us on our knees laughing with his stories and tales of his life in show business. Thanks for the memories, Terry!