Wooden Wonders on the Greenway 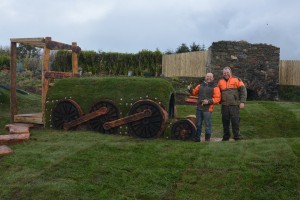 Renowned Fenor carver John Hayes has showcased his incredible talents on the new Waterford Greenway.
Along with James ‘Joxer’ Doyle who lives in Dunhill, John has just finished working on two impressive new playgrounds which are situated along the route of the former railway line. The duo worked in conjunction with Waterford City & County Council and Creative Play Solutions in Galway.
One playground is situated near the Crooked Bridge near Clonea, while the other is located near the old Durrow railway station. The playground at the Crooked Bridge features a miniature replica version of Durrow Tunnel and the nearby viaduct.
The playground at Durrow, which is based on a railway yard, features railway suitcases as stepping stones and includes an impressive locomotive.Included are quirky features such as picnic benches in the shape of giant sandwiches, along with giant cutlery. Additionally, there are bike stands which resemble railway wheels. An old oak tree from Mount Congreve, which may have otherwise ended up being used as firewood, was used in the construction process. 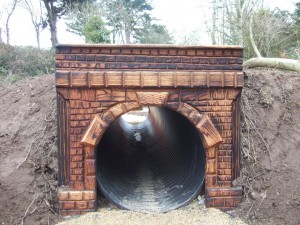 A miniature version of Durrow Tunnel, created by John Hayes.

John says it was important to keep the railway theme in both playgrounds and to keep everything as natural as possible while also including a fun element. He says both playgrounds are areas where people can stop off for a break and kids can have fun. There are plans to construct other similar areas along the Greenway route in the near future.
“The carving took around eight weeks, and everything else came together over about three weeks,” explained John.
The playgrounds will be open from March 25th when the Waterford Greenway will be officially opened.
John, who rose to fame thanks to his ‘Angel of Fenor’ masterpiece, is incredibly busy working on different projects throughout the country, including a 50-foot troll for Dublin City Council. He hopes to represent Ireland at the World Chainsaw Carving Competition in Cheshire, England later this year, an event which he says is one of the top five chainsaw carving competitions in the world. John and The Munster Express appeared on RTÉ series ‘The Local Eye’ which was originally broadcast in 2015. The series examined quirky stories which rose to national prominence thanks to the help of local newspapers. 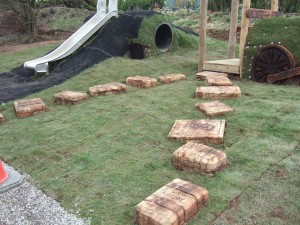 The playground at Durrow features railway suitcases as stepping stones.