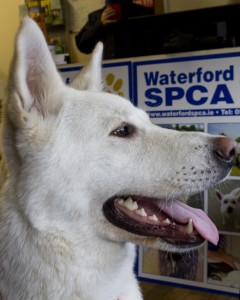 “February is the worst time for animals, as children go back to school, and the novelty has worn off” says Barbara Bent, Chairperson of the Waterford Society for the Prevention of Cruelty to Animals (WSPCA).
Such cases add to the heavy work load of the WSPCA and the ISPCA but luckily, they can now call upon the added help provided by new full-time inspector, Alice Lacey who has been dealing with complaints in Waterford and South Tipperary since last October.
Her authorisation to act in these situations is a direct result of the close partnership that exists between the WSPCA and the ISPCA.
“Over five years, we partially fund the ISPCA, after which we would hope to be funded by the ISPCA head office,” explained Barbara Bent.
The WSPCA also provide the kennelling, re-homing, vaccines and neutering of the animals rescued in the Waterford and the South Tipperary area.
Not only will this partnership eventually fund Waterford operations, they also give authorisation to the inspectors of the WSPCA, gained from the signing of a service agreement in May 2014 with the Minister for Agriculture, Simon Coveney. 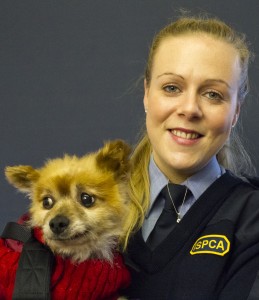 Signed as part of Section 74 of the new Animal Welfare Act, it gives the responsibility of animal welfare to the ISPCA, and in turn, any local branches which are linked to them.
Inspectors now have the ability to enter land where there are animals in need, seize them immediately, without Garda presence, if necessary and to issue welfare notices for animals.
“This agreement is an improvement to the original legislation from 1911, which wasn’t really fit for purpose” said ISPCA CEO Dr Andrew Kelly, referring to the Prevention of Cruelty to Animals Act 1911.
Alice, who began her work as a part-time inspector and did without these powers, has found a huge difference in the efficiency she can work with.
In the case of Mika, the white Alsatian, who was found with 11 other dogs, including seven puppies, Alice was able to act immediately.
“I just knew that she had to come with me, and I was able to do that without waiting for back-up”, she recounted. Chained up, she was surrounded by rubbish, with no obvious shelter available. The other dogs were kept in similar conditions, with the puppies being kept in runs which were inadequate. She is now doing well at her new home, and the seven puppies she was rescued will be available to adopt after proper rehabilitation.
This was also the case of Hector the Pomeranian, who was surrendered with four other dogs, having been found living in one of two muddy pens, without access to food and water. Now placed in foster care, Hector is ready for adoption.
Despite the conditions they lived in, both dogs have excellent temperaments. “I think dogs are very loyal and they know when they’re being treated well. They know when they’re pets” said Alice.
The flooding of recent weeks has also caused a great deal of concern for inspectors, given the health and safety risks. “Over the next few years we hope to train our inspectors in boat rescues, so that we can rescue animals and people in the event of flooding” said Dr. Kelly.
However, until such training is in place, the advice given is to try to avoid the necessity. “If you don’t have the facilities to keep animals inside, try to move them to higher ground. Don’t be afraid to ask your neighbours for help” advised Alice.
However, the prevention of cruelty remains the organisation’s main aim. Although the stories of court cases are most often reported, there are several cases when the owners as much as the animals need help.
It was for this reason that the Early Warning System was begun. First instigated on a farm in Wexford, in which Barbara Bent assisted, the system is a collaboration between local SPCA groups, the IFA and the Department of Agriculture.
“If owners require assistance because of sickness or other issues, emergency food and help will be given for the animals” explained Barbara. This prevents suffering in animals before it can begin, and gives the owners time to figure out the best course of action for them.
The ISPCA also wishes to educate people in how to care for animals. “We hope some day to have this on the curriculum in every school” explained Dr Kelly.
Unfortunately, at the moment, they can only run free education programmes for schools at all levels. Beginning in January, they will come to schools and teach children of younger ages about caring for animals and wildlife, while the older ages will be taught about circuses and intensive farming. “Children need to be taught about having the right pet for the right situation” explained Barbara. 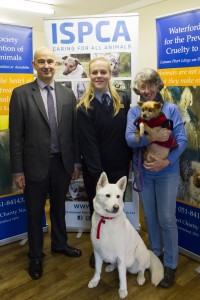