Home » Community News » South Kilkenny » "Get the Cable Car up: We'll shoot a video on it!"

"Get the Cable Car up: We'll shoot a video on it!" 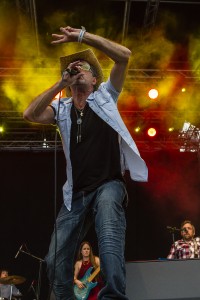 Putting the South Quays to non car-parking use, in addition to the installation of a cable car across the River Suir, are both ventures Propellor Palms frontman Paul Butler is hugely in favour of.
Paul, whose band played to another rocking audience at the Theatre Royal on Saturday evening last, told The Munster Express that he’s in favour of measures that can bring more visitors into the city centre.
“I’d have objections to all of the car parks on The Quay,” he stated. “It should be full of marquees, food stalls and theatrical arts, like what you see in other major cities. You wouldn’t see a waterfront used like that in France, in Belgium, or in Amsterdam. Some people would probably declare me a heretic for having such a view, but surely we could be a little more imaginative on The Quay, couldn’t we?”
As for the cable car proposal, which Cllr Adam Wyse (FF) recently revived (an idea first publicly mooted by his late father, Gary), Paul added: “When I heard that, I thought: what an excellent idea! I’m going to be the first person on it and I can’t wait to shoot a video on it, going from the south side, into the north side, and up and over the Ard Rí and that stunning, view of the full Quay and the city beneath me: I think that would be absolutely incredible.”
Paul Butler’s comments on The Quay’s car parks echoed sentiments expressed by Waterford Walls Ambassador Dermot Bannon (of RTE’s ‘Room To Improve’) when visiting the city prior to the 2017 festival back in May.
“What is Waterford’s USP: what is its unique selling point?” said Bannon, whose mother hails from New Ross, while his father is a native of Dungarvan.
“For me, it’s probably one of the most scenic riversides of any town or city in Ireland – I think it’s absolutely stunning. And it does break my heart, every time I walk down The Quay, to see a big sea of car parking. When The Quay was designed initially, it was where all the ships ‘pulled up’ and it was a bustling place. Now that’s no longer the case.”
He added: “It’s an amazing riverfront, yet it’s given over to car parks. Now you can still have car parking there, but ideally not as much of it. You could take pockets of it and put it to better use – but if it was all gone, just imagine, you’d have a whole other street there, facing onto the river. The Quay street, where Shaws is, it’s a beautiful street to look at, it’s beautiful to photograph, but how nice is it to walk up and down? It’s not very intimate – you need something on the other side to interact it – and then you have this phenomenal river. And you’ve got the Greenway now, in such proximity to The Quay, and Waterford needs to start taking more advantage of that.”
Said Dermot Bannon: “There’s nothing like walking down the street in the middle of a city or town, stopping to have a coffee, going about your business, that’s human interaction, you’re doing something with your life as opposed to just consuming, and that’s something I feel that as a nation we have given away…we don’t want towns to become more isolated places and when you’ve less people living in the middle of cities like Waterford, where a lot of people would have lived 150 years ago, particularly above shops, you’re definitely losing something.”
Dermot Bannon cited the rejuvenation of Westport (“I’ve seen it heaving on Tuesday nights”) and Temple Bar (“it was going to be a bus depot”) as proof that urban centre regeneration can work with sustainable planning. “Small little ideas and small little changes can make a massive difference,” he added.