Mother welcomes €8.4m for daughter (18) after HSE court settlement
Money will go towards therapies for Ciara 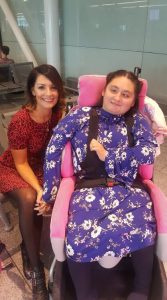 Jean Ormond and her daughter Ciara from Ursuline Crescent.

The mother of a teenager with cerebral palsy has welcomed the end of their battle with the HSE over the circumstances of her birth.Ciara Ormond sued the HSE through her mother, Jean, who alleged that Ciara’s cerebral palsy was as a result of injuries sustained during birth.The HSE did not make a full admission of liability and settled the case last Wednesday, 3 July, for €8.4m.It had been alleged that there was a failure to properly monitor the labour, delivery and birth on 5 November 2000 at Waterford Regional Hospital.
Ciara, now 18 and living in Ursuline Crescent, has spastic quadriplegic cerebral palsy, and needs around-the-clock care and has to use a wheelchair.Jean said she began the fight for Ciara over 12 years ago while being her daughter’s full-time carer throughout that period.Speaking to The Munster Express, she said: “It was a very difficult battle and I’m glad its over.“The settlement will mean that Ciara’s future is secure, now she can access all therapies she needs which was a struggle previously. We can also build a more suitable house for Ciara with everything she needs.”
It was further claimed in the High Court that there was an alleged failure to ensure continued and careful monitoring of the condition of the baby Ciara and Jean during labour, including careful monitoring and recording of foetal heart rate.
Unreasonable gaps in the monitoring of both was also claimed, including an alleged lack of monitoring between 12.10pm and 1.35pm on November 5th, 2000.It was allegedly monitoring was discontinued for that period of time and there was an alleged failure to intervene and deliver the baby in an appropriate prompt and timely manner.
The claims were denied and the HSE said there had been a delay in bringing the case.
Ciara, who loves music, clothes and style, suffers from spasms and can only hold her head up for a few minutes at a time.
For any of the treatment Ciara has received during her life, such as speech and physio, Jean has had to “fight for it all”.“It was a battle and stressful…I felt she deserved to have what she needed.
“Ciara has gone into adult services now and basically there are no services, so the money has come at a good time,” she said.
Court proceedings were filed on Ciara’s behalf in May 2017 but Jean’s fight for her daughter began over a decade ago. She paid credit to law firm Augustus Cullen for their work.A statement following the settlement said the Ormond family was relieved that Ciara would now “finally get all of the specialist care and therapy that she needs and deserves”.
It continued: “Ciara has been awarded an amount of €8.4 million. This is not some kind of windfall and this settlement today is to secure Ciara’s future as she will be totally dependent for the rest of her adult life.“No amount of money will give back what she has lost out on, and will continue to lose out on in the future.”