Facebook and Twitter went bananas for Waterford singer and actor Glenn Murphy and his collaborator Ronan Scolard after Adele invited both to take to the 3 Arena stage to perform before a full house on Saturday night.
This came in the wake of the duo’s online medley of four Adele ballads going viral in spectacular fashion last week, with Time, MTV, USA Today and Mashable posting their beautiful rendition. 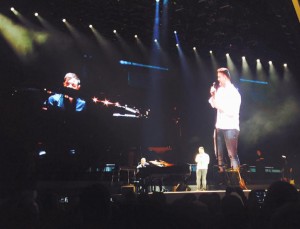 Her.ie’s Facebook upload alone had generated almost 8.5 million uploads as we went to press on Monday afternoon, all of which prompted a wowed Adele to invite the duo on stage last Saturday to deliver a repeat performance. It all felt a far cry from the De La Salle College Hall that Glenn commanded during his secondary school days!
With local and national media outlets keen to hear what Glenn has made of a whirlwind couple of days, the man of the moment told The Munster Express that an international media source had secured first refusal on an interview with both himself and Ronan.
Posting on his Facebook page on Monday morning, Glenn wrote: “Okay. So. What the F*CK happened last night?! This absolutely 100% is a dream but there’s videos of it?! How is that even POSSIBLE?! Thank you an unending amount of times to everyone who’s reached out, I’ll be in touch eventually. @ronanscolard – this is something we can tell the grandkids at 80. And to @adele – you beautiful, beautiful queen. You changed our lives last night. We love you. X” 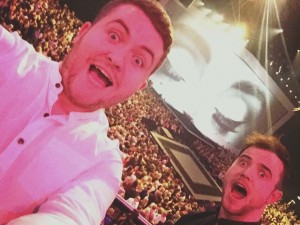 Greatest Waterford Selfie ever? Glenn Murphy and Ronan Scolard on the 3 Arena stage after being invited to perform by Adele on Saturday night. Inset: the duo in full flight!

Glenn added that Saturday’s concert represented “the best moment of my life so far” and he admitted that he was overwhelmed by the good wishes both he and Ronan had received in the wake of the most high profile night a Waterford singer has enjoyed since Chris Doran sang in the 2004 Eurovision Song Contest. And while Doran’s star has long since faded, one suspects we’ll be hearing about Glenn Murphy and Ronan Scollard for many years to come.
And once, perhaps, Ellen De Generes (as Billy McCarthy speculated on WLRfm on Monday morning) has had her chat with Glenn and Ronan, we’re looking forward to catching up with Waterford’s newest superstar!