The weather was kind and the crowd came out for the annual Tramore August Racing festival meeting.The course was in good shape , the well planned watering worked well during the dry spell, with added rain in last fortnight it meant the going was good for horses and punters, as there were good sized fields of horses in the races.Family Sunday was very successful with lots of kids having a great time and good jump races for race goers.They even had an American sponsor from the famous Lexington, Kentucky , home of the biggest race in the USA.
Peter Kiely and Roddy O’Byrne, both with Tramore connections work there in McCarthy’s Bar and supported the main race with total prize money of 20k the max allowable.
They told MC Kieran O’ Connor how much Tramore town and course had improved and modernised. 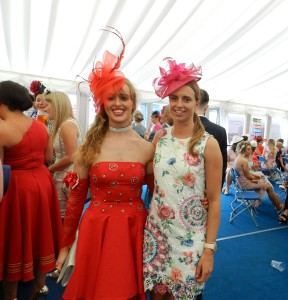 It was also a day of remembrance for the late Joe O’ Shea and Jim Harney.Kieran O’ Connor noted that they were the stalwarts that saved the race course and now they were gone but the race course is in good order now, but their contribution at the time was immense.Noreen O’ Shea and Mrs. Mary Harney were there on behalf of their late husbands and presented prizes to the winning owners.
Noreen said Joe loved Tramore and many customers were asking about him over the week and were sorry to hear he had passed away.
It was also a day when Sue Phelan bade farewell. The hugely successful manager is moving into organic farming and also lecturing in Kildalton College in Piltown, Co. Kilkenny in equine studies.
Sue is completing a Masters in organic farming on Scotland with an emphasis on animals, she told the Munster ExpressThis is a trend for the future to improve quality and have more healthy animals.
She was presented with special gifts from staff and a further presentation is planned for the October race meeting. She has done a tremendous job in Tramore and will be hard act to follow is the general view. 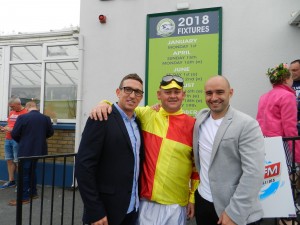 James Melay, Lismore Lawn getting in the racing spirit with his future best man Mark O Halloran and Nicky Whelan, having a stag event in Tramore

We wish her well and she has done a great job on the course and will be sadly missed.The biggest day at Tramore races was again Ladies Day on the Saturday and they came from far and wide for the event .The winner was Catherine Healy from Kilkenny. There were ten finalists in total; Jessica Manning, Waterford, Catherine Healy Kilkenny, Anna Slavinska, Cork and Poland, Graine Keenan, Fermoy Cork, Alison Walsh, South Kilkenny, Andrea Murphy, Kilkenny, Catriona Brennan, Castlecomer, Co.Kilkenny,Denise Butler, Tramore, whose family are regulars at Tramore, Anne Cusack from Dunmore East,Edel Halpin of Rathgormack , Co. Waterford.Marietta Doran from Carlow said the style was amazing and she could have picked 50 in total if she could, the entry was bigger than ever.They all had nice accessories but the best accessory of all is wearing a smile.Mary O’Neill of WLR did a competent job on the day interviewing entrants and getting their story.
There were many younger ladies this year and that brings a large crowd for the fashion, music, racing and craic at Tramore but no men this year made it into the final ten remarked the judge.
We met a good few Tramore contestants but there were girls from all over. Kilkenny had good representation in the final as did Cork so Tramore Races reputation is growing for this event and the €1000 prize attracted many entrants, well done Red Lane and Catherine Keighery on the main sponsorship.Entrants were offered prosecco on arrival, got photos taken and had great fun meeting one another and seeing the fashion and remarkable headgear, some of it home made like the Polish entrant.
Edel Morrissey, a former winner remarked too on the high standard on display We got to talk to Sinead Lohan from Tramore.
Tramore’s top female tennis player was in the final stages of the Fitzwilliam Irish Open last year, just getting beaten in the final to a UK challenger.
She focused on her studies this year finishing her masters in Economics at Miami University this summer, she was there with her friend Aoife O Sullivan from Tramore, enjoying the day out at Tramore Races. We met lots of other who made a big effort on the day.
The wind and light drizzle meant that many went indoors during the evening, earlier in the day, there was also a special moment when the late Walter Halley, who was head of the stewards
And a shareholder in Tramore Racecourse was remembered with a minutes silence, noted Kieran O Connor, with jockeys standing to attention.
The music later was provided by local musician Owen Kavanagh and his Brand New Cadillac band .Taxis were in short supply around town, later in the day with the rain falling, many were seeking lifts or having to walk down town afterwards as the rains and wind picked up later in the evening.Pubs down town had much entertainment on offer and did very well. Manager of the Majestic Hotel, Mark Whelan, noted on Sunday, presenting the leading jockey prize to Rachel Blackmore,The first time a woman has won it, said, overall, it had been a great summer in Tramore with tropical type weather and the town had been buzzing for the week of racing.