Greenway will be ‘jewel in the crown’ of Waterford

Huge numbers already using amenity
which is yet to officially open

Kieran Foley reports
EXCITEMENT continues to build around the Waterford Greenway, which has been described by local councillors as the ‘jewel in the crown’ of Waterford.
Although the Greenway has yet to officially open (with construction work still taking place along the route) thousands of people are using the amenity each weekend.
At the April plenary meeting of Waterford City & County Council, Cllr Pat Nugent (FG) said the Greenway would be the ‘jewel in the crown’ of Waterford.
He spoke of a recent day when he said up to 1,000 people used the Dungarvan to Durrow section alone.
While welcoming such interest, he said ‘no parking’ signs were not being adhered to and many cars were blocking entrances used by farmers.
He also raised some concerns over steep embankments in certain areas. 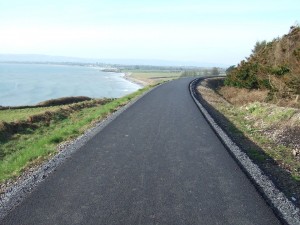 A stretch of the stunning Waterford Greenway near Clonea Strand.

He said these were “legitimate concerns from genuine people” which had been brought to his attention and were not from “cranks”.
Cllr Nugent asked that the council look at rectifying such issues along the Greenway.
“It’s a wonderful, wonderful success but there are small things that need tweaking,” he said.
In response, CEO of Waterford City & County Council Michael Walsh reminded people that the Greenway was not yet finished.
He said no part of the Greenway was officially open “even though a lot of people are using different bits”.
Mr Walsh said a full health and safety audit would be carried out along the Greenway and explained that fencing was proposed for certain areas.
“We’re looking at putting together plans in respect of enterprise activity along the Greenway,” he said.
He added that Waterford City & County Council would seek to “enhance the story and develop the tourism product” of the Greenway and said he hoped the amenity would open “possibly the first week of August”.
Cllr Breda Brennan (SF) asked if there were any plans to extend the Greenway to Tramore.
Director of Services Paul Daly said that extending the Greenway to Tramore was “a long term goal” but wouldn’t be achieved easily.
“We have had an initial look at that but we haven’t progressed much further than that,” he said.
Cllr Declan Clune (SF) agreed that the Greenway would be the “jewel in the crown” of Waterford and described it as “a massive economic driver” for the area.
However, he raised a health and safety issue concerning the proximity of the Greenway to the Waterford & Suir Valley Railway.
In response, Paul Daly said the council was examining health and safety in relation to this issue.
“We haven’t finalised plans but we’re looking at the option of fencing,” he said.
However, he said the risk was “low”.
Meanwhile, a number of public meetings have been taking place in Waterford in relation to the Greenway.
A meeting at The Park Hotel in Dungarvan last week was attended by over 100 people and was addressed by Richie Walsh, Don Tuohy and Ray Mannix of Waterford City & County Council.
They spoke of the economic, social and health benefits of the Greenway along with information regarding the construction phase.
Jim Power, economist and an avid cyclist and walker, also spoke about the economic benefits and gave a detailed account of how towns and villages in Mayo have benefitted from the Great Western Greenway.
He gave an account of Newport which was described as being “on its knees” during the recession and is now a vibrant town with accommodation, cafes, bike hire etc in abundance.
He outlined some statistics in relation to the Great Western Greenway in Mayo.
In 2014, overseas visitors accounted for 38 per cent of users.
“A customer is a volunteer with money. The idea is to get them to volunteer their money,” he said.
Jimmy Taaffe from Waterford Leader Partnership also joined the top table as did Lynn Cahill from Waterford Council in her tourism role to answer questions.
On Wednesday morning last, also in The Park Hotel, Fáilte Ireland held a workshop under the facilitation of tourism consultancy group BlueSail which was attended by around 40 people.
This workshop was aimed at linking the Waterford Greenway into the Ireland’s Ancient East Tourism initiative.
A public information meeting took place in the Rainbow Hall, Kilmacthomas last night (Monday) while another meeting is planned for the Viking Hotel, Cork Road this Thursday evening April 21st at 7.30pm.