Guardian of the Deise!

Woodcarver John Hayes set to create international landmark in Waterford
WATERFORD is set to have a new landmark of international standard. Renowned local woodcarver John Hayes is currently working on his largest and most ambitious project to date – a 120 to 200 feet high sculpture which will be located in a prominent city location.
The creation, entitled ‘The Guardian of the Déise’, celebrates Waterford’s vast history and its status as Ireland’s oldest city.
John has likened what is planned for Waterford to other world renowned and instantly recognisable landmarks such as the ‘Angel of the North’ in Gateshead, England and ‘Christ the Redeemer’ in Rio de Janeiro. A feasibility study on the project is currently being completed and costs are being finalised.
Once 2019 Capital Grants have been applied for, it’s hoped that significant progress will be made on the project by 2020.
John has been working closely with Executives in Waterford City & County Council, ‘Ireland’s Ancient East’ and Fáilte Ireland, and is also accessing EU funding streams.
“Everything has been very positive,” he told The Munster Express. 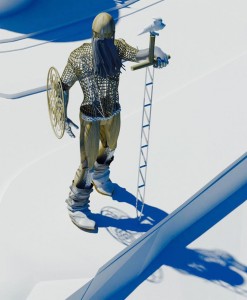 ‘The Guardian of the Déise’ is a 120 to 200 feet sculpture which will be located in a prominent city location.

“We’re really starting to gain traction.”Three potential prominent locations in Waterford City have already been earmarked for the project which John is confident will “transform” Waterford. “It will give us a brand which is unique to Waterford and will really make us the gateway to the South-East,” he said.
He hopes his latest creation can do for Waterford what other renowned landmarks such as the ‘Statue of Liberty’, ‘Eiffel Tower’, ‘Angel of the North’ and ‘Christ the Redeemer’ have achieved for their respective cities
John, who prides himself on thinking outside the box and promoting Waterford in everything he does, passionately believes in the importance of having a big vision for Waterford.“This will make a statement that we’re the oldest city in Ireland and will invite tourists to come and start their journey here,” he said.
“You can show people photos of every major city in the world, but show them an iconic image and they will instantly know which city it is. This will do that for Waterford.”
He is keen to create an “experience” and says ‘The Guardian of the Déise’ will provide Waterford with a “kiss the Blarney Stone moment”.
While exact details are still being finalised, visitors will be able to enter the sculpture and climb through the Guardian’s body where they will be rewarded with a spectacular view across Waterford City and the surrounding areas.

The Guardian’s outstretched arm will be holding a giant sword.As with many of John’s other projects such as the ‘Dragon Slayer’ sword, he is keen to tell a story through creating a tapestry.Construction will consist of a superstructure with cladding and materials added to enhance the project. It’s hoped that a Guardian trail may be developed in Waterford which will incorporate other locations of interest. John has been closely following a number of similar high profile projects including the famous Kelpies in Falkirk, Scotland. The giant sculptures of horses’ heads have gained international renown and contributed to generating hugely positive knock-on effects for the local area.
“The knock-on effects have been huge and we have already seen what that means with the Waterford Greenway,” said John. Since his ‘Angel of Fenor’ creation, John has gone on to complete countless projects throughout Ireland including the impressive ‘Dragon Slayer’ sword which is located in Waterford’s Viking Triangle.John has already attracted international attention and has recently returned from the Canada where he participated in the Chetwynd International Chainsaw Carving Championships.
He has been invited to attend a number of other international events this year.