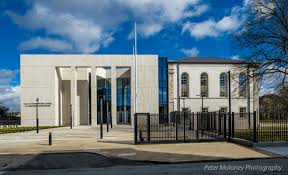 Two women pleaded guilty to assaulting another woman on the city’s Quay during a jury trial held in Waterford Circuit Criminal Court last week.The women had each pleaded not guilty to a charge of assault contrary to section three of the Non-Fatal Offences Against the Person Act 1997, but changed their pleas after samples of evidence had been heard.
The court had heard that Martina McGrath had stabbed Karina Foley, who is from the city, while Natasha Halligan held her at the same time at around 2.30pm on June 18th of last year. State prosecutor Conor O’Doherty told the jury that the assault resulted in the injured party sustaining significant injuries.

Karena Foley said that on the morning of the date in question, she had went to Lisduggan for food before going to her partner Damien Jacob’s house, which they left along with their three dogs. The couple were out for a walk on Merchants Quay, Ms Foley said, when they had seen the two accused, who she described as “old friends” she used to know. The jury heard that there had been argument between the complainant and both accused previously and so Ms Foley thought “something might happen”.
Approached
She said she thought “something might happen” when she saw Martina McGrath and Natasha Halligan were also on the Quay near the Clock Tower, as an argument had occurred between them previously. Ms Foley said Martina McGrath, with an address provided as Connolly Place, Waterford city, started screaming and when the accused began to approach the couple, Damien Jacob said, “Don’t touch my girlfriend or I’ll kill you.” Ms Foley had kept walking while Mr Jacob was stopped speaking to people nearby who had been drawn to the scene by the first interaction between the couple and the two co-accused. However, she felt she had been hit on the back of her head and then again on her face, when she realised Martina McGrath was pulling her. She reacted by pulling Ms McGrath’s hair and shortly after heard Ms McGrath tell Natasha Halligan: “Help me or I’ll kill you.” Ms Halligan, with an address provided as Rosgrove House, Hennessy’s Road, Waterford city, then held Ms Foley by the hair while Martina McGrath was at her left side, hitting the injured party at the back of her head. After the assault had ended Ms Foley noticed she was bleeding and that her back was “stinging”. When Damien Jacob lifted her jumper up a gash was visible across her back.
‘Lucky’
She showed the jury a small cut on her face which was a result of the attack, and added that she has other cuts under her chest, at the back of her neck as well as two puncture wounds on her body. A further wound “like a track mark” going up along Ms Foley’s back was also described to the jury She said she was “lucky” that the blade used was small and that the two punctures didn’t result in a more serious injury. The green top she had been wearing during the assault was presented to the jury, with blood on the back and on the bottom of it.The injuries required Karina Foley to be hospitalised for two days following the attack.
At the outset of the trial Mr O’Doherty told the jury that it was the prosecution’s case that if one person holds someone and the other person injures them, those two people have jointly assaulted someone. CCTV footage was presented earlier to the jury by Detective Sergeant Donal O’Donoghue from three different sources; two were Garda cameras and the other was from IPairc, formerly Q-Park. Prior to the jury being empanelled, Judge Eugene O’Kelly said the two accused had been identified by CCTV.
After Karena Foley had finished giving evidence, both defendants entered guilty pleas.
‘Unforeseen development’
Judge O’Kelly told the jury that the change in plea was a “totally unforeseen development” and meant that it was no longer necessary for a jury to deliberate on the case. “Both accused have acknowledged their guilt in the matter,” the Judge said. The trial had been expected to last for up to three days. Conor Roberts BL, representing Natasha Halligan, told the court his client has a history of offences but said that violent crimes have not been a part of that, while Tara Geoghegan BL, representing Martina McGrath, said there was a history of substance abuse with her client. Both were remanded in custody by Judge O’Kelly until 22 March for sentencing, with a probation and welfare report to be carried out for each.