Hands Off Our History!

Eoghan Dalton Reports
WATERFORD Metropolitan Council must write a letter dismissing the notion that Cork is Ireland’s oldest city.
That request was made by Fianna Fáil’s Eamon Quinlan, who said he was “distressed” to see Cork laying claim to the title.
During A recent excavation in the Rebel City, evidence of house building from 1070 was found – 15 years before an urban layout began to emerge in Waterford according to Cork City Council.
However this was disputed by Waterford Museum of Treasures, who say that the Vikings were in the locality some 150 years before they were in Cork. 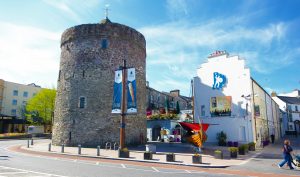 Reginald’s Tower and the replica Viking longboat are central to Waterford’s Viking offering.

Cllr Quinlan said Waterford city and county will have to start protecting its Viking brand.
“There is genuine concern that Cork will use its position as the meeting point of both the Wild Atlantic Way and Ireland’s Ancient East, which was refused to Waterford, to try and take dominance over both tourism brands and solicit funding from organisations like Fáilte Ireland to the detriment of counties such as Waterford,” he said.

“These national tourism brands such as the Wild Atlantic Way, and now Ireland’s Ancient East, have superimposed themselves over long established regional brands. The Sunny South East brand is a ghost of what it once was and when Waterford does the right thing, by ramping up a unique and marketable image that compliments the overall national programme, we now face competition who not only wish to participate in such programmes, but try revisionist history in an attempt to push us down into second place.”

He continued: “It is a testament to the brass neck other counties are willing to display to ensure they get a piece of whatever is coming out of central government, and we here in Waterford need to have the same hardnosed attitude when it comes to ensuring the prosperity of Waterford is protected from any and all who would knock us down. After all, if there is only a finite amount of money for such programmes we need to ensure we receive the largest share we possibly can.”