People of South-East urged to demand second cath lab and 24/7 cardiac care
THREE cardiac campaign groups in the South-East have combined to organise ‘Have a Heart Day’.
The groups are calling on the people of the South-East to come out on Saturday 10th February to show support for the demand for 24/7 cardiac care at University Hospital Waterford (UHW).
The event will involve a walk from the Williamstown Centre to UHW, beginning at 2.15pm and finishing at 3.15pm – mirroring the much publicised ‘Golden Hour’.
There will then be a brief announcement regarding ongoing and future action including taking the campaign to the streets of Dublin. 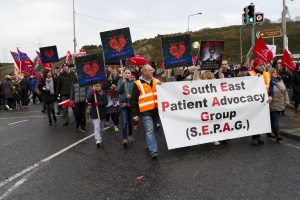 Participants in the protest held in Waterford in January 2017.

The groups involved, Health Equality for the South East (HEFSE), 24/7 Cardiac Cover for the South East and the South East Patient Advocacy Group (SEPAG), say the initiative is to highlight the ongoing medical injustice that continues to be perpetrated on the people of the South-East.
Organisers are asking people to support the call on government to implement a second Cath Lab and 24/7 cardiac care at UHW for the people of the South-East.
In a statement, they said: “We note the latest capital expenditure proposal to relocate Dublin maternity and paediatric hospital services is now estimated to cost over €1.6 billion. We in the South-East region believe we have a right to an expenditure of just €3 million euro to double our regional cardiac service delivery and provide 24/7 cardiac care at UHW for every South-East citizen.”
For full text of this story see this week’s print edition of The Munster Express newspaper