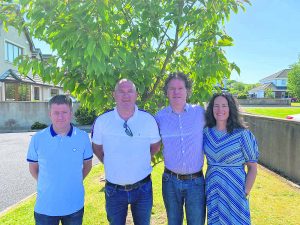 Covid-19 has created much fear in the community, but the story of the recovery of  local man Thomas Gallagher has generated much needed optimism.
After spending 66 days in hospital he finally got home last week and was cheered leaving the hospital.
Thomas was enthusiastic in his praise for the hospital staff and nurses and in particular his consultant Dr. Wahid Altaf.
Thomas was in serious danger and Dr. Altaf said he was lucky to come out alive and that he really could have died.
Thomas had been in recovery in the middle of battling Covid-19, and then got a second knock, contracting pneumonia and also thrombosis.
This was even worse than the coronavirus as his immune system was already in a weakened state.
It was necessary for him to go on a ventilator for breathing purposes twice while in hospital.
His story is a remarkable tale of fortitude and was covered on national TV and local radio.
We managed to speak to him last Friday after what had been a very busy day for him.
There had been a live video call, for close to an hour, later edited and distributed to the many plants of Sanofi, numbering 75 around the world. The group employ over 100,000 people.
It is a great morale boosting story of a staff member coming back from a difficult illness.
Thomas told us that it was great to be home. He is getting many calls. This can be difficult at times as he needs to  rest as tiredness can set in after the illness.
He is delighted to be with his family again, after being in isolation all those days at UHW when he was in the Dunmore Wing. There were others there with him from time to time, but he was the longest there.
He lost much weight, 12 kg at the beginning and more later.
He told us how he sometimes looked out at the window and could see people at the bus stop near the hospital and how he got a glimpse of people coming and going and chatting.
Thomas also told The Munster Express that he had a long conversation last week with the Minister of Health Simon Harris. The Minister was going to give the good news of his recovery to Dr. Tony Holohan, the chief medical officer.
The Gallagher family are very well known in Waterford and we are delighted to report such a good news story in the midst of this pandemic crisis.
His brother Trevor, also contracted the virus and he was with him in ICU for six days on a ventilator. Thomas’s sister Terese also got it and husband Ciaran. All are now recovered, thankfully.
His wife and two children, Ellen and Tom, did not have the virus.
He was so glad to see them all on leaving hospital as well as his neighbours on the Dunmore Road, near Booterstown.
He is talking about his experience because he wishes to highlight the danger of the virus and show that it is still active. Cases are still in the hospital and around the region.
The number of confirmed cases of Covid-19 in Waterford has surpassed 150 but the county still has one of the lowest incidence rates per population.
Thomas is a GAA fan and his father was on the 1948 All Ireland minor hurling team. The family are strongly connected with Mount Sion. His grandfather Thomas was a Labour Mayor of Waterford twice in the mid 1950s.
Thomas is also a nephew of the late Noel Griffin of soccer fame with Waterford FC, who recently died.
Thomas says he is happy to now have his family around him and to be getting good wishes from so many people.