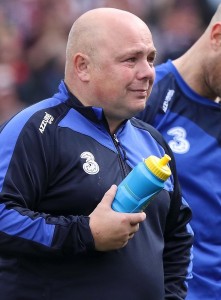 Derek McGrath lauded praise on his Waterford players in the wake of Sunday’s All-Ireland Senior Hurling Final defeat to Galway at Croke Park, but has remained tight-lipped about his managerial future.
Speaking prior to the group’s homecoming to Waterford on Monday evening (as we were going to press), McGrath said his own future was something he would arrive at in due course. But now, he stressed, was the time for any announcement about his own future.
“I haven’t really put a huge amount of thought into that,” the Deise boss admitted at Croke Park on Sunday evening.
“The lads have invested some time into it, they’ve invested a huge amount of time over the last three to four years. We’ve been on a rollercoaster. They actually just spoke about the now; Kevin (Moran) spoke about the now, Dan (Shanahan) spoke about the now, and we just said in any of the post match analysis that will come in terms of, you know, will they stick together, won’t they, we’ll kinda leave it, there’ll be no speculation about it, we wouldn’t even consider it. We’re just in the now, completely disappointed but yet proud as well. The nucleus of a good team is there going forward but there’s just no guarantees.”
The clamour for the retention of the current management team of Derek McGrath, Dan Shanahan and Eoin Murphy was made loud and clear on local airwaves on Monday morning,. with ex-Deise player and former Under-21 boss Shane Ahearme among those leading such calls. County Board Chairman Paddy Joe Ryan also expressed his hope that on WLR that McGrath and his colleagues might commit to another season or more at the helm.
Meanwhile, corner-back Noel Connors sounded an uplifting note, which will delight and enthuse the thousands who travelled to Croke Park, along with those who tuned in all around the city, county and beyond.
“We’ll step back, have a look at it and see what we need to develop in the coming weeks and months. But I suppose, fundamentally, we have to develop, we have to move on, we have to try and change a few things here and there but our aspiration won’t be any different in 2018: to lift Liam MacCarthy.”
See full edition, Sport 1-19 for more