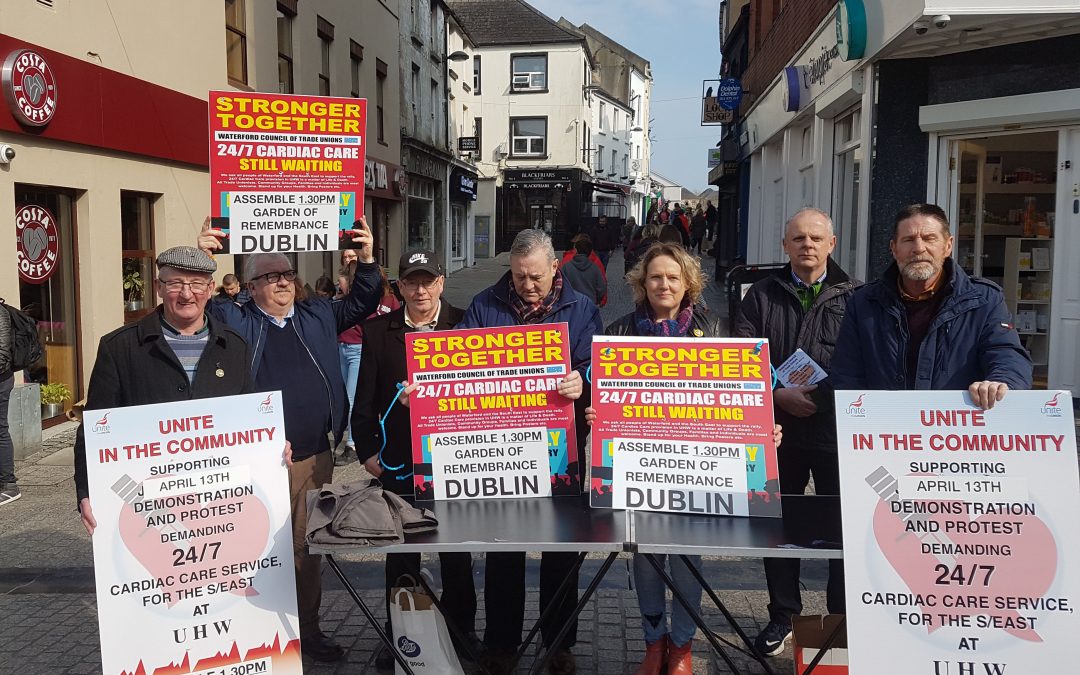 Eoghan Dalton Reports
Campaigners will take to the streets of Dublin this Saturday in support of 24/7 cardiology service at University Hospital Waterford (UHW). It’s the latest major demonstration following on from January’s 10,000-strong protest in Ballybricken. A bus being arranged by the Waterford Council of Trade Unions is also being put on for the day and will leave The Forum at The Glen on Saturday morning at 10am. 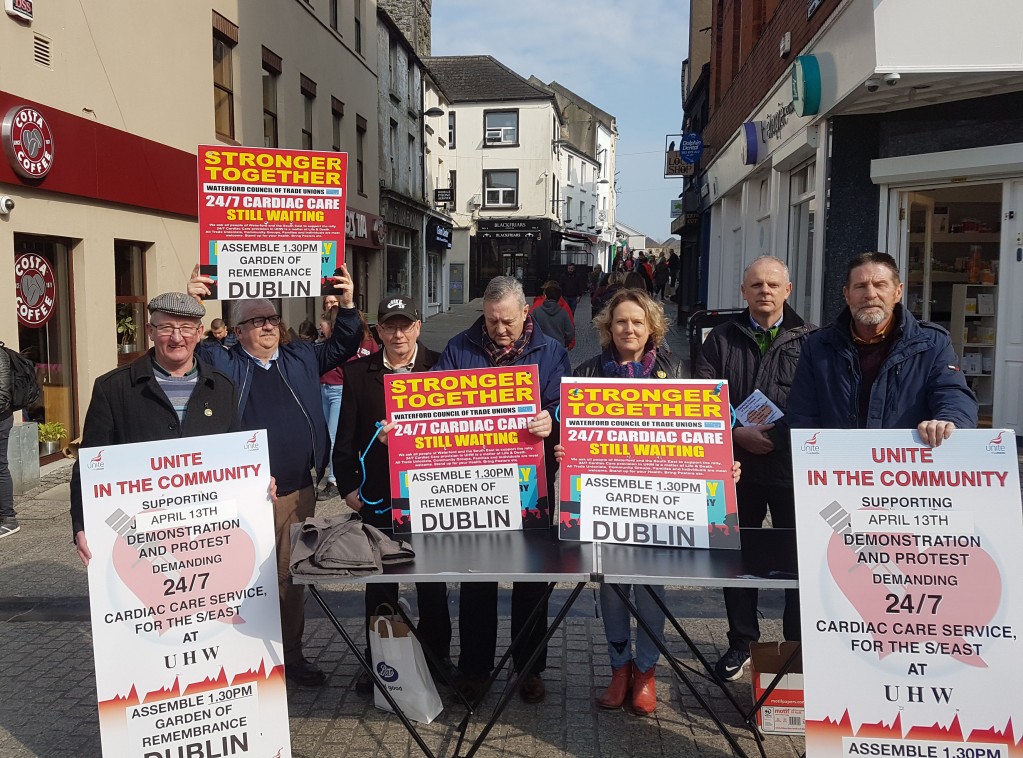 Trade Unionists in John Roberts Square canvassing support for this Saturday's cardiac care march in Dublin this Saturday. Transport will leave for the capital from the Forum at 10am. To contact organisers call 051-875438. | Photo: John Power

Cardiac campaign groups and Waterford Trades Council members are urging as many as possible to attend on the day in Dublin and to call on Dublin relatives and friends to support the protest.Cllr Matt Shanahan (Ind), who is chairman of Health Equality for the South East (HEFSE) campaign group said that, “despite all the positive announcements about expanding cardiac services at UHW, nothing of any significance has actually been delivered. The cardiac patient’s journey and care protocol remains exactly as it did at the start of this new Government administration in 2016”.
He is basing his re-election campaign around the issue of 24/7 cardiac care as he seeks to maintain the seat he gained after fellow Independent Mary Roche resigned last year.
“I intend if people support me to continue pressing the case for 24/7 cardiac care for the South East and my campaign slogan will be ‘Fighting for Waterford Hearts 24/7,” he said.
Organisers of Saturday’s march have confirmed that the two well known Winterval personalities ‘Bob and Bruno’ will attend the cardiac march in Dublin and will play a leading role on the day. Cllr Shanahan says the pair’s participation will serve to highlight a significant message : “Their hoof beats on the street will remind people of an earlier time when cars were not available to the many – this mirrors the cath lab situation in the South East where we are permanently locked in a time warp by having cardiac cath lab access just 25 per cent of every working week.”
A statement from the Waterford Council of Trade Unions said the due to the cath lab’s office opening hours, it is closed for 75 per cent of the time. “More importantly, however, 98 per cent of seriously ill cardiac patients who are sent to other hospitals in an ambulance are not treated within the limit of 90 minutes which the HSE says is absolutely essential. This can, and has led to people suffering heart muscle loss, brain damage and death.“The best clinical advice is that persons who have a heart attack need to have a full range of treatment within 60 minutes in order to ensure the best health outcome. No patient in the South East can get access to treatment in either Cork or Dublin within that time.”
Marchers are to assemble at the Garden of Remembrance on Parnell Square East at 1.30pm on Saturday. The protest will begin at 2pm with a walk to the Merrion Street Dáil Entrance where a subsequent rally will be held.Meanwhile, it was reported last week that a third cath lab may make it to Waterford at the UPMC Whitfield Clinic. It is understood that the private hospital, which collaborates with the HSE on certain areas of healthcare, has contacted UHW with a view to meeting to discuss the issue.

For those wishing to travel with the campaigners’ bus, there will be a charge of €5 per person and people can leave their names with Unite the Union, Keyser St, by telephone at 051-875438, or by calling into the office between 9am and 5pm.