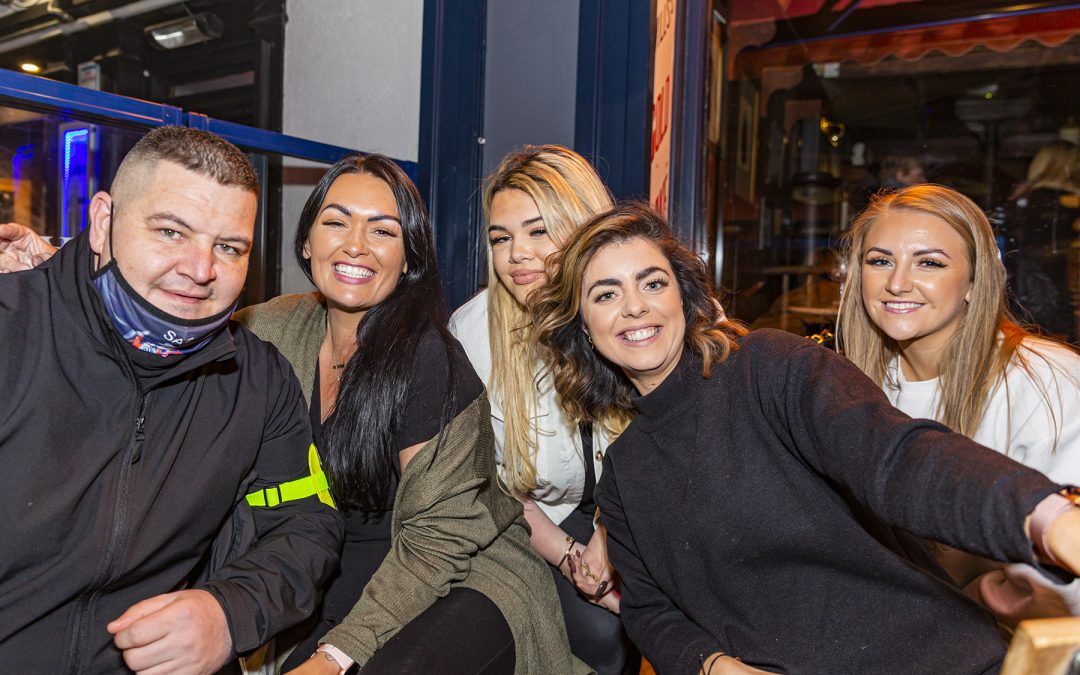 Queues formed outside many local hostelries throughout the city at the weekend as proprietors and customers alike celebrated the lifting of restrictions after two years of lockdowns and restricted trading.

“Today is a good day,” declared Taoiseach Michael Martin as he made his announcement on the steps of Government Buildings on Friday evening. The 8pm curfew was removed as and from 6am on Saturday morning as was social distancing and the need for Covid-19 certs to access hospitality.

Business was booming on Saturday as queues for Geoff’s pub on John Street formed from early afternoon while queues for Factory nightclub started later in the afternoon but increased rapidly with hundreds of people waiting patiently for the opportunity of a late-night dance and drink.

There was a strong Garda presence on the streets on Saturday with Gardaí reporting several public order arrests but nothing of a serious nature.

Anna Jordan of Jordan’s Bar on The Quay said Saturday was a day of celebration. “It was fantastic. Myself and dad opened the doors at about 11am and there was a rush for the stools at the bar. They all had a little smirk on their faces, delighted to be back up at the counter. We had a full house from about 2pm.”

She said it was also nice to see people drinking at a relaxed pace, the way they used to before restrictions were imposed. “There’s was nobody watching the clock and trying to see could they squeeze another one in quickly,” she laughed. 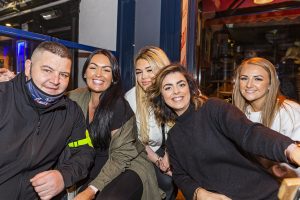 David, Beckey, Emily, Jane and Sinead in Geoff’s enjoying a night out in Waterford on Saturday.

Anna added that things felt like they were getting back to normal at last. “We’ve missed the banter with the regulars. They are kind of like your mates – you see them every day and they all have their own spot at the bar. That’s been missing. There was real sense of happiness on Saturday. Everyone was relaxed and there was no divide between people.”

One thing she won’t miss she said is having to ask for Covid Certs and ID. “You’re behind the bar and someone comes in and you have to leg it to the door and ask for their Covid pass and ID before they’re even in the door. I was looking back over the book and I found people had written things like ‘Santa 666’ for their signature!”

Meanwhile many restaurants are getting ready to open their doors with restrictions this week. Kamila Bystrzonowska, owner of Momo on Patrick Street admitted whilst she was thrilled that restrictions had been lifted, she was also a little bit nervous.

“The announcement kind of came out of nowhere. I can’t get my head around it. We’ve gone from zero to 500 and while on the one hand I’m extremely happy to be getting back to normal, I have mixed feelings,” she said.

“My fear is – are we opening too soon? Will we be closed down again? We have waited so long for this, it almost seems too good to be true.”

Kamila quipped that she would have so much spare time now that she didn’t have the paperwork to do regarding contact tracing etc. “It is going to be so nice not to have to ask for Covid certs or tell people no you can’t have a table of seven or you have to leave by 8pm.”

However, from a positive point of view, bookings are flying in. “I have had 70 bookings since Saturday,” said Kamila on Monday morning. “I got one booking for 20 people for May! There are lots of bigger groups wanting to book for Communions and Confirmations. People can’t wait to go out.”

From a business point of view, she said she was aware and very grateful to the Government for all the financial supports but she was slightly anxious how everyone would manage once they stop. “Nobody could get staff during the last couple of years so that pushed wages up which is fine when you have financial supports in place but that’s not forever. I just want to be able to pay my bills, my staff and taxes myself with no financial support.”

Cormac Cronin of the Bodega restaurant on John Street was delighted with the news regarding the lifting of restrictions but said the hospitality sector had a lot of ground to make up.

“We have lost a lot of money to be honest. All of us have. The government supports were helpful, but the bank balance is going the wrong way and we are not covering costs,” he said. And although he was pretty confident that lockdowns and restricted trading were a thing of the past, he was also concerned for the future.

“The government will have to keep the financial supports in place until April. The costs of running a restaurant have gone up. The cost of produce has gone up by about 20%. Prices are going to have to go up in restaurants because we can’t absorb all those costs on our own,”

Meanwhile in Tramore last Saturday there was a major surge to local pubs, hotels and restaurants for the new opening hours. Some premises, like The Majestic, remained closed for refurbishment. While the Beach Hut was also closed. Some smaller pubs like Marthas on Queen Street will re-open in a month, it is believed. 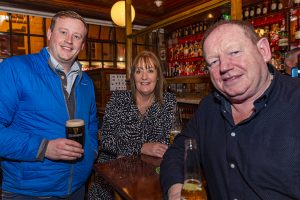 John Sheedy, owner of the Ritz bar, said he was very happy with the easing of restrictions, adding that it had been a difficult couple of years.

The Restaurants Association of Ireland CEO Adrian Cummins has described the announcement as a day of liberation for the sector, “businesses are breathing a sigh of relief after 2 years of lockdowns and restricted trading and are excited to trade once again.”

He continued, “Staff and customer safety will continue to be paramount for the sector. The Association also welcomes comments by Government that current supports will have no cliff edge. Hospitality businesses welcome the re-opening of their doors without restrictions but know that it will take some time to trade out of this and small hospitality businesses countrywide have built up debt over the past 2 years – supports will be vital.”