"I Just Wanted to Ask A Question"

Cardiac campaigner denied chance to make UHW query to Taoiseach
Well-known cardiac campaigner Willie Doyle was literally left standing at the WIT Arena on Friday last, when his hopes to field a question to Taoiseach Leo Varadkar about cardiac services didn’t come to pass.
A frustrated Mr Doyle stood quietly and respectfully with a raised arm during the closing stages of a Question and Answer session held following the speeches delivered by Mr Varadkar and his Ministerial colleagues at the Project Ireland 2040 showcase.
WIT President, Professor Willie Donnelly, who chaired the event, later apologised to Mr Doyle via this reporter when asked why Mr Doyle hadn’t been given the opportunity to field his question. 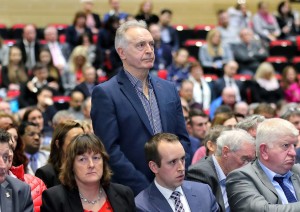 “I apologise,” said Prof Donnelly. “I don’t the know the man. As you know, I don’t live in Waterford, I work here and people who may be known by other people wouldn’t be known by me. I would say I indicated to the person next to him (Mary Coughlan) I indicated that I saw they wanted to ask a question. I was going around the room for questions and it was indicated to me that we’d run out of time. It was a pre-defined amount of time made available; the Taoiseach had interviews and other things to do and that’s all it was. It was not an intention to be offensive to anybody or to stop anybody from asking a question.”
A disappointed Willie Doyle didn’t mince his words when he spoke to this newspaper following the conclusion of the event.
“The Taoiseach came down to speak about the future of the entire region, and I wanted to raise a question about the present situation in the region where at this moment in time (5pm on a Friday), the only cardiac facility for a half million people in the South East is locked up and won’t re-open again until Monday, and that’s the reality of cardiac cover in the South East in 2018. And that’s an absolute disgrace.”
Mr Doyle added: “I had hoped to say a few words and I stood up, only to be told that I should have made a submission. Now, on our way in, we got no information about this whatsoever, we were already booked in, had made our application online and got our tickets, we’d everything done above board, but there was never a mention of having to submit a question beforehand. Normal procedures at these functions is that when you want to speak, you stand up and the roving ‘mic’ is handed to you, you introduce yourself and you ask your question.”
But this didn’t happen on Friday last. A man approached both Mary and Willie, and asked Mary if Willie had submitted a question beforehand. “We knew nothing about having to make a submission,” she said. “We need to ask a question and we were entitled to ask it, and it was at that point that Willie stood up”.
And following that, a moment that can’t even be described as a stand-off materialised given Willie Doyle’s conduct, but concluded without Mr Doyle getting a chance to ask Mr Varadkar about cardiac care at UHW. “The agenda wasn’t strayed from, which was very disappointing,” he continued. “So much for freedom of speech!”
* In a statement issued over the weekend, Mr Doyle said: “This Fine Gael government, backed by Fianna Fáil and the Independent Alliance has taken us back to the era of the Iron Curtain where freedom of speech was denied. This government is trying to control what we say. I attended Project Ireland 2040 having pre booked this event at the WIT Arena where I was denied the chance to ask as to why we are the only region in this country without a 24/7 Cardiac Service. Selected people were allowed to speak.
Our locally elected John Halligan along with Leo Varadkar watched while I was ignored…
“People of the South East have to watch their loved ones after 5.30 and at weekends travel to Cork or Dublin while having a Heart Attack knowing that they may die and will definitely suffer permanent heart damage and all because of where they live and Very Weak Political Power. Fine Gael, Fianna Fail, Independent Alliance and Councillors prioritise life and have the courage and decency to stand up for the people and resign from the your party until this service is delivered.”