Kieran Foley reports
NEW owners are being sought for a number of vacant properties on the Waterford IDA Industrial Estate, but concerns remain in relation to the current condition of these sites.
Numerous properties within the Estate, some of which are in the ownership of the IDA and some of which are privately owned, are lying idle and in an extremely poor condition.
Concerns by local Councillors including Cllr Adam Wyse (FF) were highlighted in The Munster Express in October.
Cllr Wyse subsequently received assurances from the IDA’s Regional Manager for the South East, Brendan McDonald, that work is ongoing in attempting to find new owners for the buildings and that there have been a number of expressions of interest. However, Cllr Wyse still has concerns.
“Someone inquiring about a building being sold doesn’t mean it’s being sold,” he said.
He has also reiterated his view that existing buildings should be focused on rather than prioritising new developments such as the IDA’s ‘advance factories’.
“It doesn’t make sense to be putting so much money into new builds. We should make the best of what we already have instead of focusing so much on new builds,” he said.
“I understand that businesses want new exciting properties but we already have adequate buildings here and there is a massive difference between the cost of a new build and a renovation.”
He says there are at least five or six factories within the Industrial Estate which could easily employ 50 people each and generate around 300 jobs. 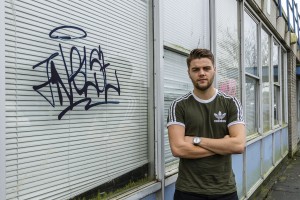 Cllr Adam Wyse (FF) has continued to highlight the condition of some vacant properties in the IDA Industrial Estate, many of which have been sprayed with graffiti. Photos: Mick Wall.

“We have highly skilled graduates that are unfortunately leaving Waterford. If we gave them an opportunity, they could stay here,” he said.
He again highlighted the negative image which the current condition of some of these buildings generates.
“If you’re a student at WIT, or a CEO of a company visiting Waterford, it leaves a very bad impression if you see so many derelict buildings,” he said.
“A lot of these buildings still display the name of their previous company so that’s not very good branding.”
The low amount of IDA sponsored site visits to Waterford is concerning, he says, but not surprising given the condition of these buildings.
“We’re not getting the same amount of investment or jobs. Nationally, it looks as though things are picking up but in the South East we are still a black spot,” he said.
Cllr Wyse says many commitments were given to Waterford by the IDA during his tenure as Mayor but these haven’t materialised.
“The IDA have given Waterford City & County Council many promises about site visits here,” he said.
“They have admitted a lot of their work is Dublin focused but that they try to branch out as much as possible. They said they had increased their budget and would focus on the South-East region but that hasn’t happened. The IDA seems to be focused on good headlines and statistics. Statistics don’t matter to the individuals living here.”
It emerged last week that Mullingar in County Westmeath received four times as many IDA sponsored visits than Waterford in 2017.
In the first nine months of 2017, the IDA conducted a total of 31 site visits to the South-East, with Waterford receiving nine; Carlow seven; Kilkenny six; South Tipperary seven; and Wexford two.
By comparison, 36 IDA sponsored visits were made to Westmeath. This was detailed in a written question tabled to Tánaiste and Business, Enterprise and Innovation Minister Frances Fitzgerald and Fianna Fáil TD Mary Butler.
Speaking following a sitting of the Oireachtas Jobs Committee at City Hall on Tuesday last, Sinn Féin TD David Cullinane said it is obvious that State agencies are failing Waterford and the South East.
“The South-East has been underperforming for over a decade. Unemployment is higher than the national average, job creation is slower in the region, educational attainment rates are the lowest in the State and we are not retaining third level graduates. The HSE and the Department of Health are denying the region vital health infrastructure,” he said.
“Only one per cent of IDA supported jobs created in 2016 were based in the South-East despite the region making up 10.5 per cent of the population of the State. Last year only nine IDA supported site visits came to Waterford and two to Wexford. This is scandalous. Waterford City has a lot to offer. It has a motorway to Dublin, a first class waste water infrastructure, two serviced and zoned industrial sites and available property solutions. It is also a great place to live with beaches, a fantastic coastline and the new Greenway. However we are being failed by Government agencies.”
Deputy Cullinane also highlighted other issues which he says are hindering the region’s development.
“We are still without a University. The Department of Transport refuses to fund a runway extension at the Airport and we are still waiting for a positive announcement on capital funding for the North Quays. This is despite €85m being made available for a similar project in Limerick,” he said, with the funding of the latter investment on a four-acre site in Limerick confirmed by the European Investment Bank on Friday last.
“It is time for the Government Oireachtas members to act. We need to energetically and robustly make the case for Waterford. I will continue to speak up for Waterford City, County and the region.”