Upbeat mood as Opko announce
200 jobs at new Butlerstown plant
IDA Chief Executive Martin Shanahan is hopeful that private investment can be secured to help deliver a second Advance Technology Building (ATB) for Waterford inside the next two years.
Speaking at the IDA-built Butlerstown ATB, which has been acquired by Opko Health Ltd, which will deliver 200 jobs at the facility over the next five years, Mr Shanahan struck an optimistic note about future developments in Waterford. 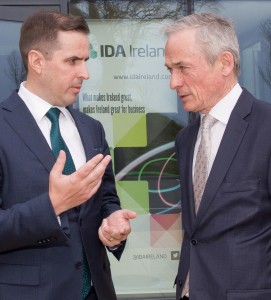 “We do have plans in the future for another ATB here in Waterford. We constantly review interest from the private sector in the first instance, and what we would really like to see is more private sector investment coming on track in the regions, and I think the acquisition of this ATB might give private sector developers more confidence – that speculative investment can lead to a return, so ideally for us, that’s what we’d like to see happening here in Waterford. But in the absence of that, we’ll continue to review our options for the region.”
Mr Shanahan said that “all investments are extremely hard won” and that it had taken a great deal of time to ensure not only a tenant for the building, but an outright owner, which had proven a pleasing outcome for the IDA.
According to Jobs Minister Richard Bruton: “It is hugely encouraging that the south east is now enjoying the fastest rate of jobs growth in the country. This announcement that the first Waterford ATB will be occupied by a top-class company like EirGen, with the creation of 200 much-needed new jobs for the city, is a great boost. I wish Patsy (Kearney) and Tom (Brennan) and all the team every success with this project.”
Martin Shanahan added: “This is a fantastic investment by Opko, which is going to create 200 jobs over the next five years, which is extremely positive. And it’s also proof that our regional strategy is working, particularly the element in relation to property where we’ve built advanced buildings such as this facility in Butlerstown, which has been acquired by a multi-national investor…
“This is a great addition to the Life Sciences sector in the south east, which we have seen a lot of investment and interest in throughout the region over the past year and finally it’s worth noting that last year, Opko acquired EirGen Pharma, a local company, established by local entrepreneurs Patsy Kearney and Tom Brennan, and that acquisition is now going to lead to greater things.”
Opko Health Inc, a diversified healthcare company, has expanded the EirGen Pharma facility in developing a new Product Development Centre at the Butlerstown ATB.
Said Opko MD, Chairman and CEO Philip Frost: “This announcement marks a significant milestone for EirGen Pharma and this investment underpins our strategy to establish Ireland as a Centre of Excellence for R&D and supply chain activities.
“We appreciate IDA’s efforts to create an attractive business environment for companies like ours, and we look forward to expanding our workforce by drawing upon the region’s highly skilled labour pool.”
EirGen, which focuses on the development and commercial supply of specialised oncology products for global markets, has also secured additional land at Butlerstown with a view to future expansion.
Asked if the announcement would have proven beneficial from an electoral perspective 10 weeks ago, Minister Bruton wryly observed: “Well, it just goes to show that these things aren’t politically driven and are all based on good, solid economic thinking.”