Home » All Front Page News » Top Stories » "IF THEY BUILD IT, OUR KIDS WILL GO"

"IF THEY BUILD IT, OUR KIDS WILL GO" 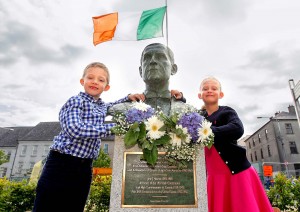 Pictured were twins Lucas and Olivia Berlinger from Switzerland, great-grandchildren of Waterford born John J Hearne, Architect of the Irish Constitution as they admire a bust erected in his honour at a ceremony outside the Bishop's Palace. Both placed a bouquet of flowers at the bust. See News 15 for more. | Photo: Noel Browne

CONCERNED parents have vowed to remove their children from a mid-County Waterford school if plans to erect giant wind turbines in the area proceed.
A large crowd attended a meeting held outside Seafield National School, located between Ballylaneen and Bonmahon on Thursday last, June 29th.
The meeting was organised by the Chair of the Seafield NS Parents Association John Kelly who says he had requested a meeting with the school’s Board of Management on numerous occasions in order to discuss concerns.
The concerns relate to a proposal by BSB Community Energy Ltd to erect turbines in the area – some of which would overlook the school if given the go-ahead.
As no meeting was agreed to by the school, Mr Kelly invited any concerned parents and locals to attend last week’s meeting which was held outside the school.
The Munster Express understands that a large number of parents plan to remove their children from the school if BSB’s proposal goes ahead.
“Our children’s health, safety, well-being and education depend on everyone’s strong stance against BSB” said Mr Kelly.
“We stand united against these wind turbines.”
Seafield NS was contacted for comment on the issue, however no comment was received at the time of going to print.
As fears continue to mount in the area over the controversial proposal, an information briefing by those opposing the BSB plan took place in the Ballylaneen Community Centre on Sunday last and also in the Barron Hall, Stradbally yesterday (Monday). A protest is planned for this Sunday July 9th, meeting at 12pm in Bonmahon Car Park.
The protest will travel from Bonmahon to Seafield School (2.4km gradual walk).
The event will also feature sand art on the beach and turbine height demonstration.
“If you oppose the turbines in your community, come along and join the 99.2 per cent who agree with you,” said an organiser.
“Let’s show BSB how protective we are of our beautiful community, the Greenway and the Copper Coast. We want to protect our families, our homes and our beautiful landscape.”
Meanwhile, the committee of BSB is inviting people in the locality to take part in an information and discussion event on Thursday, July 13th from 4.30pm to 8pm at the Barron Hall.
According to the organisers, the purpose of the event is to give accurate information about the project, listen to suggestions or comments that people have, and respond to questions. The event will feature: stalls with projects engineers and specialists from Jennings O’Donovan, who will be able to take questions from the public; information boards on the turbine locations and specification, and assessments which have been carried out to date (environmental, visibility and noise); and information about potential financial benefits for local individuals and community groups.
Depending on the level of interest, during the afternoon and evening, there will be group discussions hosted by Gearóid Fitzgibbon, to further engage and record views of people living in the parish.