Illegal Dumping an Littering "out of hand" in Waterford

ILLEGAL dumping and littering are out of control in County Waterford, according to local Councillors.
At the March Comeragh District of Waterford City & County Council, Councillors continued to grapple with how best to combat such issues.
“Rubbish in this county is totally out of hand,” said Cllr Liam Brazil (FG).
He said areas of the N25 from Waterford to Dungarvan and the R676 from Leamybrien to Carrick-to-Suir, as well as areas of the Comeragh Mountains, are “totally and utterly a disgrace”.

Cllr Liam Brazil: “We, as a county, need to do something”.

“Everywhere you go rubbish is being dumped,” he said. “I honestly believe it’s totally out of hand.”
He complimented groups such as the Comeragh Community Development Group (CCDG) who staged the annual ‘Clean up the Comeraghs’ event on Easter Monday.
However, he said the roads which were cleaned could be badly littered again in a week’s time.“We, as a county, need to do something. We are always talking about rubbish here in the Comeragh District,” he said. “We know we live in a beauty spot and we know what these culprits are doing to our beautiful county.”
He said there is an onus on the Council to bring culprits to justice and highlighted the need for increased CCTV at blackspots.
Cllr Brazil said there are numerous examples of improvements after CCTV has been put in place. However, he once again expressed his dissatisfaction that the Council cannot adopt a ‘name and shame’ policy. Cllr Declan Clune (SF) also examined the issue of naming and shaming and referred to the example of Dublin City Council which engaged in an initiative whereby images of culprits, as captured on CCTV, were publicly displayed.Some local Councillors have called for Waterford City & County Council to follow this example but officials have expressed reservations because of data protection issues. “Is there any definitive legal advice that we can’t do it? Is it something we have looked into?” asked Cllr Clune. He said the current on-the-spot fine of €150 is “not huge” to most people. 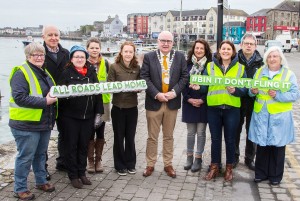 He noted that when Councillors had called for an increase, they had received a “wishy washy reply” from government. “There doesn’t seem to be any appetite from central government to increase the penalty,” he said. Cllr Clune said he was unsure about CCTV being a “long term solution” based on the level of investment required.
He said culprits need to “feel it in the pocket” and asked for the naming and shaming option to be explored.