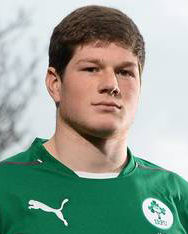 Woodstown native Jack O’Donoghue has been called into to the Irish Rugby squad for the remainder of the Six Nations Championship.
O’Donoghue, a former Ireland Under-20 captain, who cut his rugby playing heels in the colours of Waterpark RFC, only turned 22 in January, was drafted into the squad by Irish coach Joe Schmidt on Monday morning.
The news was greeted with great pride , both by his Waterpark colleagues and his alma mater, De La Salle College, with O’Donoghue set to provide back row cover for Schmidt’s 35-man squads for the clashes with Italy and Scotland.
Fellow ‘Park alumnus and 42.ie rugby reporter Murray Kinsella described Jack’s inclusion as “fantastic news”, with O’Donoghue’s ability to play across the back row believed to be a key factor in Joe Schmidt’s decision.