Under The Munster Microscope: Janet Carey 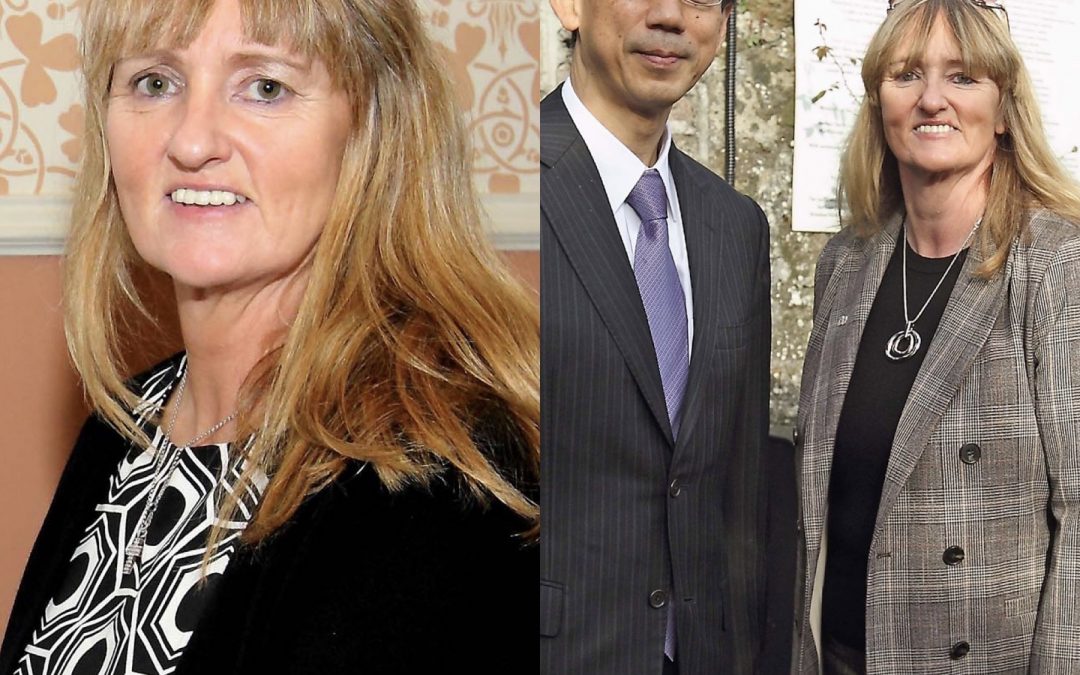 Janet Carey is a Waterford City native, best known for her role as Marketing and Business Development Manager at Tramore’s Lafcadio Hearn Japanese Gardens. She has been involved in the project from the beginning, having spent 35 years in graphic and web design and marketing, with vast experience in the tourism sector. Janet moved to Tramore 27 years ago, but still considers herself a blow in! You will often find her swimming at Newtown Cove or enjoying local scenery. A lover of the arts, and someone with a strong affinity to the city as part of a well-known family, Janet Carey is a proud Waterfordian. As she says, why would you want to be anywhere else?

I definitely had no idea of what I wanted to do as a career and I hated leaving school, I cried the day I left. The Presentation Convent in Waterford was a fantastic school and I was so engrossed in school life and my friends, I never really thought about what I was going to do afterwards. However, my two favourite subjects Art and Geography really took on a new meaning for me when I became a Graphic Designer, especially working with clients across the Tourism sector, it was a match made in heaven. Although I worked extensively on Tourism projects for over 35 years, I could never have envisaged myself working on the development and marketing of the magnificent Lafcadio Hearn Japanese Gardens. Funnily enough, my family like myself have always been into Japanese and Oriental design, so the passion for Japanese Gardens and planting was always there.

There is no doubt that my parents have always been my source of Inspiration. My father Seamus was very hard working and instilled in us a sense of community, he conducted and played in St. Patrick’s Brass Band for over 40 years. My brothers are also heavily involved in soccer. My mother has a great business sense and also encouraged me to travel the world when I was younger. The best part is they took us everywhere, we spent our childhood growing up on the beaches and coves along the Copper Coast, something we still do today.

Winter or Summer, I would try to start with a very early morning swim in Newtown Cove or the Guillamene, followed by a long walk down the back strand in Tramore to the sandhills with family or friends and the dogs of course! A picnic somewhere on the Copper Coast would also be on the cards, there are so many places to swim in we really are spoilt for choice. I think I would finish the weekend off with a trip up the Comeraghs to Mahon Falls or Mount Melleray.

What’s your favourite ever piece of art (book, film, song, album) and why?

Every Sunday morning I get up and play the original vinyls ‘The Best of Mario Lanza’. Since I was a teenager, my father and I played them together every Sunday morning and it became a real tradition and is still a beautiful memory, I also try to sing along but the less said about that the better!. I love Renaissance and Baroque Art, especially Titian and Caravaggio, I also enjoy the work of American realist Edward Hopper. However, I am a big fan of Harry Clarke Stained Glass, so whenever I travel anywhere, between the Renaissance Art and Harry Clarke, I spend a lot of time visiting Churches and Galleries.

I am very proud of all my family, my mother is 87 now and has a great sense of fun and ‘Joi de vivre’. Both my brothers have dedicated over 45 years to Southend Soccer Club and are so involved in the community as are my two nephews, niece and sister-in-law. Outside of the family, the main thing I am so proud of is being involved in the Japanese Gardens and the amazing team working there, seeing how far the gardens have come in the last six years is overwhelming. My biggest joy is lighting them up by night in December, watching the faces of the children when they come through the gate is pure magic and something I am very proud of. 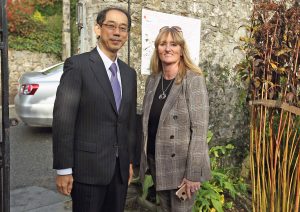 Janet with the Japanese Ambassador to Ireland, Mitsuro Kitano.

I always turn up early or on time and spend a lot of time hanging around, even if I try to be late – I still end up turning up early. Punctuality should be a considered a good thing but I can get a bit frustrated if I have to wait.

I just cannot get to grips with people who are cruel to animals. I rescued a beautiful dog two years ago and have since discovered just how innocent, clever and loving animals can be and how much they are a part of the family. This has become my soapbox now and I really feel more should be done under the law to protect animals.

Listen to your Mother, it turns out, she IS always right!!!

The thing I love most about Waterford is that we ‘have it all’. As Ireland’s oldest city we are steeped in history, we have world class museums and Waterford Crystal in the City. Our coastline is magnificent and also a designated UNESCO Geopark, then there is the greenway, mountains, stunning scenery and garden trails all within easy reach, who would want to be anywhere else?

Six years ago, I wrote a children’s adventure book based on a fantasy world set deep under the cliffs of Waterford’s Copper Coast (working title: The Secret Coastline). It is still in the bottom drawer and probably needs to go through about ten rounds of edits before it is fit for consumption! Maybe, someday I will get around to it.

Peace. I would like to see an end to war, apart from the awful loss of life, I think there must be nothing worse than becoming a refugee and being involuntarily displaced from your home and family.

I think I would like to be a geologist or a marine biologist, whatever it would be, I could never be too far from the sea, I feel suffocated if I go too far inland.

No regrets. I would class myself as someone who lives in the present. I lost two of my childhood friends when they were very young and as a consequence have lived my life with the attitude, ‘don’t put off for tomorrow, what you can do today’.

I am happy in my own place. I travelled extensively over the last 30 years and I feel I have seen and done all that I want to do. My friends would say it is hard to even get me to go anywhere these days even within Ireland. I love Tramore and Waterford it has everything I want for now. But if I do get itchy feet again, then I think my next destination would have to be Japan.

Still sea swimming, walking the dog and chatting to visitors from all over Ireland and around the world down in the Japanese Gardens. Most of all, I hope that we all can see an end to this pandemic and come out the other side happy and healthy.