John Carey Honoured on the Shore he Loved

John Carey’s memory was poignantly honoured at his Requiem Mass held at Crooke on Tuesday morning last, as his family, both bloodlined and political, in addition to friends, neighbours and Gaels, gathered to honour a public servant who did Passage and Waterford some service. A lingering sense of shock in the Fine Gael Councillor’s passing remained palpable inside the Church of Saint John The Baptist three days after his death, but the sense of love, gratitude and pride that Cllr Carey’s family expressed in how he’d lived his life proved irrepressible. That John Carey, described in a single leafed tribute distributed to mourners as “a man who worked for the people” was given a good send-off cannot be disputed. And if the old saying about a village raising a child rings true, this clearly applies in equal measure when a locality gathers to bid farewell to one of its own. The Passage and Crooke community can take pride in the welcome it afforded visiting mourners for a Requiem Mass which was celebrated by Fr Brian Power PP, with Fr Richard Geoghegan also officiating. Fr Power spoke of the “shock and sadness” which had shrouded the local community since news of Cllr Carey’s death broke, and described him as a man of faith who had both a public and private face, and held great pride in his family throughout his life. 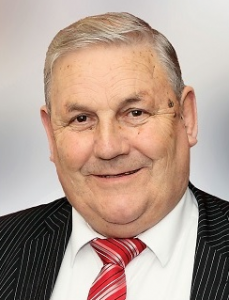 The late Councillor John Carey, who was laid to rest following Requiem Mass at Crooke on Tuesday last

Fr Power said that John Carey “had worked tirelessly for his county” with the many strands of his life happily intertwining over the busy and interesting decades he wholeheartedly invested himself in. While “politics can be a thankless job,” Fr Power added, “John was always proud of his role as a public servant and of his service to the community”.
During a touching eulogy, son Kieran spoke with love, humour and pride about his father, who as a boy walked to school in Crooke, “played around the village and when he was old enough, went salmon fishing”. John loved life on the river “and spent all of his summer holidays salmon fishing and he was earning from a young age. He then went to sea for a short time and one of trips home he met ‘Ma’ (Ann) and he got a job in the Harbour Commissioners, where he worked as a crane driver, a diver and a charged hand on a dredger (the Portlairge).”
Kieran added: “Diving was a difficult job. It entailed wearing one of these belt suits with the brass helmet and he’d have to be lowered down to walk the berths twice a year to make sure there were no obstructions so that when the ships tied in against the harbour, they wouldn’t be damaged, Now he’d have to do that twice a year and he’d often tell us that he couldn’t see in front of his hands, that there was nothing only black there, and next thing he’d walk off a board and drop about 10 foot deep, and the boys above would have to give him a jig on the line, pull him out of the hole and then he’d have to walk on again and that’s what he did to provide for us, and he never complained.”
While he wryly questioned his father’s ability behind the wheel of a crane (“how he managed it, I’ll never know”), Kieran said John was “a great father, a great husband and a great provider and we’re all very proud of him”. Following retirement from the Waterford Harbour Commissioners, John went to work with sons Kieran and Sean of S&K Carey (building contractors) “and we had a great time together, working with him. We worked him hard and he loved it, loved every bit of it”. This work included a stint in the offices of The Munster Express, which John greatly enjoyed, with at least two grandchildren joining John every day for a spin in the firm’s truck, “and he loved every minute of it. All of the grandchildren loved having their turn to go to work with Grandad, they really enjoyed it and that’s how they got to know him so well.”
Kieran told the congregation that John “was a great hurling man and he was never so proud as he was to see Passage winning their first County (Senior) title in 2013 and he was so proud that (son) Liam was a selector on that team”. John also enjoyed his card games in the Saratoga every Friday night, where a group of 10 to 12 players happily rotated every second week, where the chat flowed as well as the cards were shuffled. During his 39 years in politics, Kieran said his father made friendships across the political divide, something which had been reflected in the warm commentary afforded from all quarters in the wake of his passing. “Pa owned the ship, we all sailed on it but the rudder is Ma. She’s the one that steers us, she’s the one that gives us direction and she’s the one that will guide us.” Son-in-law Eoin delivered ‘The Hurler’s Prayer’ while fellow son-in-law William thanked everyone from near and far who had offered their support and warmth in the difficult days following John’s death, including the medical team at University Hospital Waterford, who “fought as hard as they could to try and save him”.
Among those in attendance at last Tuesday’s Obsequies were City & County Mayor Declan Doocey (FG), Metropolitan Mayor Joe Kelly (Ind), City & County Council Chief Executive Michael Walsh, in addition to fellow City & County Councillors and members of the Council Executive.
Also present were Minister of State John Halligan (IA), Deputy John Deasy (FG) and Senators Paudie Coffey, Jerry Buttimer (both FG) and Senator Grace O’Sullivan. Former Seanad Leader Maurice Cummins was also in attendance, as were former Mayor Hilary Quinlan and Superintendent Chris Delaney of the Waterford Garda Division.
An Taoiseach, Leo Varadkar TD, was represented by Commandant Caroline Murphy, while Passage Hurling Club, led by Chairman Michael Murphy, provided a Guard of Honour outside the church.
At the graveside following Cllr Carey’s burial, his party colleague Senator Paudie Coffey sang Brendan O’Reilly’s ‘The Ballad of Michael Collins’. John Carey’s funeral ended in applause, and those who knew and loved him best knew that’s just how he’d have wanted it. John Carey, son of Kathleen and Pierce, is survived by his wife Ann, children, Séan, Kieran, Nancy, Liam and Sharon, siblings Pierce and sister Kathleen, grandchildren, great-grandchildren, daughters and sons-in-law Valerie, Sharon, William, Annette and Eoin, sisters and brothers-in-law, nieces, nephews, extended family, friends and the people of Passage East and Crooke. May he Rest In Peace.