John Deasy is bookies’ favourite to top the poll 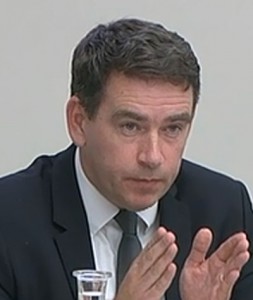 Fine Gael’s John Deasy is the bookies’ favourite to top the poll in the Waterford constituency in the upcoming General Election.
Odds released by Paddy Power last week placed Deasy 1/50 to take the first of the constituency’s four seats. The Dungarvan-based TD also topped the poll in the 2011 General Election, with over 10,000 first preference votes.
The bookmaker is predicting that outgoing Independent TD John Halligan will secure the constituency’s second seat, with odds given of 1/40. Halligan pipped Fianna Fáil’s Brendan Kenneally for the fourth and final seat in the constituency back in 2011, with over 5,500 first preference votes and his profile has grown steadily throughout this Dáil term.
Ranked third by Paddy Power to take a seat is Sinn Féin’s Senator David Cullinane, with odds of 1/9, followed by outgoing TD and Junior Minister Paudie Coffey, Fine Gael, at 2/7, and sole Fianna Fáil hopeful Mary Butler, 5/4.
Labour’s outgoing TD Ciara Conway was ranked a disappointing sixth by the bookmaker, at 9/4. Other declared candidates included in the odds are People Before Profit/ Anti Austerity Alliance candidate Una Dunphy, 25/ 1 and Renua’s Mailo Power.
Tramore-based Grace O’Sullivan had not declared her candidacy for the Green Party at the time the odds were released. 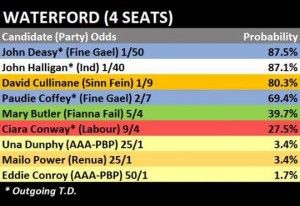 The odds being offered by Paddy Power last week, prior to Grace O'Sullivan announcing her candidacy.