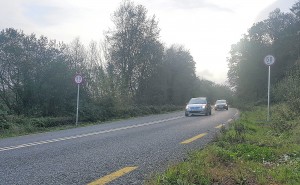 A CONTROVERSIAL new speed limit in Kilmeaden is to be reviewed following what’s been described as an “outcry”.
During a discussion on the Special Speed Limit Bye-laws 2017 at October’s Plenary Meeting of Waterford City & County Council, Cllr John O’Leary (FF) said a reduction in speed limits in many areas had been welcomed by the public and would help save lives.
However, he highlighted a particular stretch of road in Kilmeaden where he said there has been “an absolute outcry” over a speed limit reduction.
“In general, the public accept speed limits and the majority of people are law abiding citizens,” he said.
However, Cllr O’Leary said there has been an “unbelievable reaction” to the change in the speed limit on the road between Adamstown and Kilmeaden on the R680 from 80km/h to 50km/h.
As a speed van is often located on this stretch of road, Cllr O’Leary said many people now believe the road is being viewed as a “cash cow” as the new limit will mean more motorists may be penalised.
He asked that the 50km/h limit be reviewed as it is not seen as being “relative” to that stretch of road.
Cllr O’Leary made the comments after Director of Services Fergus Galvin had recommended the re-adoption of the new Special Speed Limit Bye-laws.
In May of this year, following an extensive consultation and statutory process, Waterford City & County Council adopted new Special Speed Limit Bye-laws.
Due to a legal issue, Transport Infrastructure Ireland (TII) had requested that the Council re-adopt the bye-laws.
Cllr John Cummins (FG), whom has also received representations in relation to the same issue, proposed the re-adoption of the bye-laws but called for the Adamstown to Kilmeaden limit to revert back to 80km/h.
Cllr Seanie Power (FG) was also in agreement and called for a wider review of speed limits in the area.
Cllr Power said all of the speed limits currently in place from Store-All on the Cork Road out as far as Kilmeaden need to be reviewed and pointed out the variations along the route which he said are “all over the place”.
Cllr Jim Griffin (SF) highlighted the Orchardstown (Tramore Cross) junction, which he described as “lethal”.
He noted that it had recently been discussed at a Council meeting and sought an update on the improvements which have been planned for the area in order to improve safety.
Meanwhile, Cllr Griffin also expressed concern over the area at The Holy Cross where many motorists have been rear-ended.
He called for a more “structured scheme” in relation to speed limits in the general area.
Fergus Galvin explained that there had been “multiple consultations” involving the public, Gardaí and TII in relation to speed limits.
He said he was conscious of the issue in Kilmeaden and explained that the rationale behind reducing the speed limit was primarily because of concerns for the junction at Dooneen.
Mr Galvin said there have been a number of accidents at the junction over the years.
He said there is no hard shoulder at the location and explained that the new 50km/h limit was intended to reduce the speed of traffic in the area.
In relation to the nearby Orchardstown junction, Mr Galvin said he would review the issue and report back.
In response to Mr Galvin’s comments, Cllr M J O’Ryan (FF) suggested that the Special Speed Limit Bye-laws be re-adopted but asked that the Council commit to an immediate public consultation to review the new limit at Adamstown.
Cllr O’Leary pointed out that it was “not normal for the public to be outraged so easily” and expressed his hope that a resolution could be found which would suit everyone.