Kirsten Pledges to Do Waterford Proud

Newly crowned International Rose of Tralee Kirsten Maté Maher thanked Mayor Declan Doocey and Waterford City & County Council for affording her a Civic Reception at the Large Room on Thursday last. Kirsten, a native of Bigwood, Mullinavat (she’ll be similarly honoured by Kilkenny County Council in due course), is looking forward to a busy year of commitments both at home and abroad.
“It’s been a whirlwind,” the 21-year-old admitted since she was crowned the International Rose, following in the footsteps of previous Waterford winners Brenda Hyland (1977) and Orla Burke (1983), both of whom were present in the Large Room. 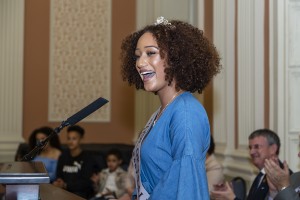 “I just want to say thank you to my family – hello Grandad (Charlie, sitting nearby). It was absolutely fantastic to have my who family down in Tralee – even the dog, Fluffy was down too! It’s great to be around you so much of the time and we’re going to be doing a lot together over the next year, which I’m really looking forward to. A big thank you to our escorts, Kieran Dunphy, Fergus Cassidy who was so good to me down in Tralee and the fantastic Shane Foran, who all bent over backwards for me in Tralee and were a huge help.”
Kirsten said she was honoured to follow in the footsteps of Brenda Hyland (who was also her judge in Tralee) and Orla Burke and said she was delighted to be part of the legacy they’ve already created here in Waterford. 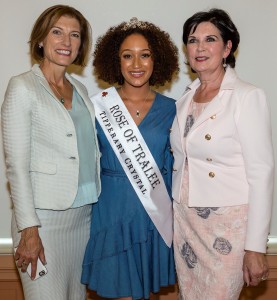 Thanking her many sponsors as well as her boss Catherine Keighery from Red Lane in Tramore, Kirsten stated: “I hope I can do you all proud for the year and I’ll keep you updated on all of my outings…thank you all for coming!” Mayor Declan Doocey (FG) said he was particularly grateful for Kirsten’s success coinciding with his term, all the more so given the early exit of Waterford’s senior hurlers from this year’s Championship: his time in office had, after all, yielded an All-Ireland win for the Déise!
Following the formalities, Kirsten was joined by her family, friends and work colleagues for refreshments at the Kazbar.