A SEVEN year old girl with Waterford roots has attracted much media attention in the US by becoming the first ever female ice hockey player to sign a one-day contract with the famous New York Rangers.
Before Christmas, Kayleigh Petersen from East Brunswick, New Jersey, signed a one day contract with the New York Rangers – and made history in doing so.
Her signing came during the “Garden of Dreams Week”, a special event at Madison Square Garden in which children from the Garden of Dreams and partner charities are able to experience either the activities of the New York Rangers or Knicks up close and personal.
Kayleigh, whose grandfather John J Fitzgerald was born in Ballinaneeshagh and lived in Griffith Place before emigrating to the US, was diagnosed with Tyrosinemia, a condition that can cause both liver and kidney failure.
In 2009, she underwent a liver transplant aged 18 months. However, by the age of five, doctors gave her approval to play hockey.
Kayleigh fell in love with the sport and is now heavily involved with her local hockey league.
She supports the New York Rangers and her dream was to spend a day with her favourite team.
With the help of the Make-a-Wish Foundation and the MSG Garden of Dreams Foundation, Kayleigh’s dream was realised.
Not only did Kayleigh get to meet those associated with the team, but she also signed a one-day contract at a special press conference. 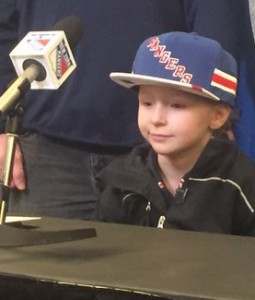 Afterwards, she received an on-ice projection at the end of player introductions, took a lap on the ice, and then sat on the Rangers’ bench during warm-ups.
Later on, Kayleigh featured in a first-intermission interview and visited the locker room to meet the team.
Her grandfather John said Kayleigh and all of the family were thrilled that she had the opportunity to experience such a special event. 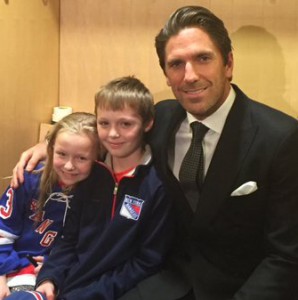