Home » All Front Page News » Mary's got a new job…

Mary's got a new job… 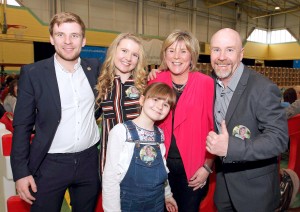 There was nobody more surprised than Fianna Fáil’s Mary Butler that she took one in every five first preferences in Waterford.
The first-time General Election candidate topped the poll in Waterford and was elected on the first quota, her 10,603 votes having comfortably exceeded the quota – a mammoth leap from the 639 votes that saw her elected to Waterford Council for the Comeragh district back in 2014.
After the party dropped from 46.49% of No 1 votes in Waterford in 2007 (the combined result of Martin Cullen and Brendan Kenneally) to 13.98% in 2011, Fianna Fáil members were out in force at the WIT Count Centre on Saturday to celebrate Butler’s coup. Amongst them was Kenneally, who lost his seat last time around.
Speaking minutes after her election, the married mother of three said she was ‘ecstatic and humbled’ at the faith placed in her by the people of Waterford.
“I’m also relieved. I always believed I was in with a shot, given the response I was getting from people, but thought I’d be fighting for the last seat. It’s just so humbling.”
A member of the Fianna Fáil party for over 25 years, Butler has knocked on doors for countless Local, General and European elections candidates over the years, including Brian Crowley, Gerry Collins and former Waterford TD Brendan Kenneally. 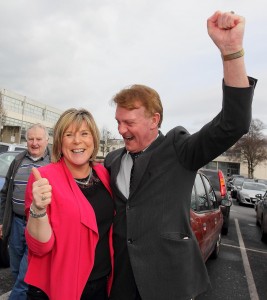 “I enjoy canvassing. I started knocking on doors after I won the convention at the end of May and I think because I got out and met so many people, especially in my own Comeragh area, it stood to me. People were delighted to see that I was calling when there wasn’t an election on and that they weren’t forgotten about. That I was interested in them, rather than their vote.
Being the only TD returned for the constituency is of no great relevance to Butler. She believes gender is irrelevant in her new career – you’re either right for the job or you’re not.
“From day one, when FF asked me would I consider standing for the party if I won at the convention, I was very interested. But only on the condition that I was the candidate and not the added person to the ticket. I was always quite clear on that. I have no problem personally with gender quotas but I think you’re either good enough or you’re not, regardless of gender.”
Butler was nominated by the party over three male party colleagues and says she has no problem challenging the ‘jobs for the boys’ culture that pervades the Irish political scene.
“Politics have been a male domain for so long and I’ve attended Council meetings and workshops where I might be the only female in the room, at plenary level. Some people would find it daunting but I certainly don’t. That being said, for a woman in politics, you must have a supportive family and friends. My husband – who was never into politics – has turned into a political animal over the past eight months. My three children {two of whom are at third level and the youngest daughter in fourth class at Portlaw NS} have also been great and I’m blessed to have the constant support of my sisters and mother in Portlaw. We’re all living, eating, sleeping at this stage, I don’t know what I’d do without them.” 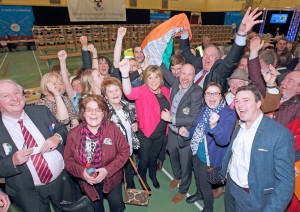 Poll topper Butler after she was elected on Saturday.

Asked whether her vote is an indication that Waterford has ‘forgiven and forgotten’ the impact that Fianna Fáil’s past policies have had on the local economy, Butler said she had experienced a ‘significant element of forgiveness’ since canvassing for the Local Elections in 2014, when the party took eight seats on Waterford Council (now nine, since they were joined by former Independent Eddie Mulligan). “A lot of false promises were made in 2011 and people had had enough. They wanted change and they have made their voices heard.”