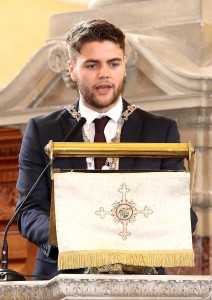 Waterford City & County Council’s outgoing Mayor says he “hates politics”; would like to see the introduction of a directly elected Mayor; and has spoken candidly about the challenges he faced during his year as Waterford’s youngest ever Mayor.
In a revealing interview looking back on his year as Mayor in both a political and personal capacity, Cllr Adam Wyse (FF) says he views himself first and foremost as a “public representative” and not a “politician”.
“I never saw myself going into politics. Even now, three and a half years in, I hate politics,” he said.
“I hate the actual corruptness and how slow it is. And the bureaucracy and hypocrisy kills me. I don’t enjoy politics, which sounds weird, and when I say that to my mother she gets worried. I don’t mean I hate the job, but I think being a politician and being a public representative are a completely different thing. When people say to me that I’m a ‘politician’, I say ‘I’m not, I’m a public representative’.”
He continued: “I think politicians have a bad name, and in a lot of cases that’s their own fault. There are a lot of good politicians out there – but no perfect ones. I’ve seen some of the things that go on and it’s upsetting.”
However, the enthusiastic 23-year-old still believes that the world of politics can change.
He admits that local Councillors have “very little power” but he hopes he can play a part in implementing change with new thinking and ideas.
Maybe it’s because of youthful naivety, but I still think things can change and that we might have a different system in 20 to 30 years,” he said.
“I have a big belief that, in politics, if you’re going to try and do something the best way is to be on the inside. I’ve spoken to people who call themselves ‘political activists’. They are not elected but are actively engaged with the public on a number of different issues. I’ve said to them: ‘Why don’t you run for office? Put your name on the ticket if you really, really believe in something. Run for office and try and change things and work from the inside out.’ But the answer is often ‘I prefer shouting in than shouting out’. People are worried they’ll get caught up in muddy water if they do come into politics.”
One issue which particularly concerns Adam Wyse is the lack of accountability.
“We call ourselves a democracy, but we still have some people, such as in the HSE, and we have no say over who they are, what they do or the decisions they make,” he said.
“We have people set up to do commissions and private reports, and then politicians don’t take their advice. It’s frustrating when you see this and compare it with the concept of politics that’s in your head.”
While he has achieved much in his role as Mayor and thoroughly enjoyed his tenure, he acknowledges that the position is “ceremonial”.
However, this is something which he would also like to see changed.
“As Mayor you have little power, and that’s no insult to the position,” he said.
“You are a figure head and head of the Council. You do the work in terms of being Chair of different committees and running the Council meetings and sign off on certain things, but without executive powers you really have the same say as a Councillor on a lot of different issues, unless there’s a split on a Council vote and you have the casting vote which rarely happens.”
He was elected through the ‘pact’ system, but says he is in favour of the idea of having a Mayor directly elected by the public so that “people have a direct say in who they want to be First Citizen”.
He believes that person should have “executive powers” and says one option would be that the top five vote getters in an area share the Mayoralty over five years.
He is certain he doesn’t want to be a “career politician” and is glad that he didn’t enter politics at youth level.
“I’m really glad I wasn’t involved in politics at youth level, as it’s even easy to get corrupted by politics then,” he said.
“My Dad was 46 when he entered politics and that’s part of why he was great. He hadn’t got caught up with all the different issues and personalities.”
Adam Wyse admits that he was “lead down the garden path, not fully understanding where I was going” on a number of occasions after first becoming a Councillor but he feels his experiences as Mayor will make him a “stronger public representative” and hasn’t ruled out entering the national political scene.
“It might be something I’d do in the future but I don’t give it too much thought. I’m sure I’d be tested but I’d like to think I’m capable of holding my own,” he said.
“I really enjoy the seriousness of sitting down behind closed doors and fighting for an issue and fighting for Waterford and trying to get something over the line. I’ve enjoyed the times I’ve been up in the Dáil this year as Mayor and when I’ve met with Ministers to talk about different issues but the local aspect can be the most rewarding when you help people or an organisation with an issue.”
Read more from Adam Wyse on overcoming confidence issues,
his lisp, and dealing with comments about his age in this week’s edition.