While there is broad political agreement on the prospect of a directly elected Mayor in Waterford, the initial details of the position as revealed by Government last week have been met with a decidedly mixed reaction locally. On Wednesday last, the Cabinet reached agreement on the holding of plebiscites in Waterford, Cork and Limerick cities, coinciding with the Local and European Elections on May 24th, to seek approval for creating an enhanced Mayoralty. 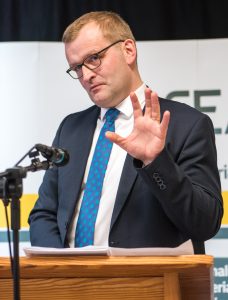