Michelle Clancy reports
A proposal to construct a single storey extension to the café at the House of Waterford Crystal on The Mall received mixed reactions at the February meeting of the Metropolitan District.
The extension, which will create a larger kitchen area and increased seating, must be approved by the Council under a Part 8 procedure, since the building is owned by the local authority.
At the meeting, Cllr Mary Roche (Ind) said it was “very positive” that Fiskars – the Finnish homewares company that purchased WWRD (Waterford Wedgwood Royal Doulton) for €400 million last May – are taking an interest in the plant and want to expand. Cllr Davy Daniels agreed and said it would be nice for the Council to get an opportunity to meet the new owners.
Cllr John Cummins (FG) noted that eleven submissions had been made on the proposed extension, adding that the House of Waterford Crystal was very important to our tourist proposition. “I wouldn’t agree with some of the submissions,” Cllr Cummins continued. “I think extending the cafe will add to the offering. All businesses in the area benefit from Waterford Crystal.”
Cllr Eddie Mulligan (FF), who made a submission himself on behalf of business owners and people employed by businesses in the area, expressed concern that the Council was giving competitive advantage to a commercial business when other nearby businesses are fighting for survival. 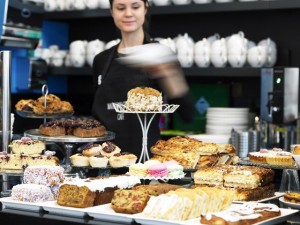 Set for extension: the café at the House of Waterford Crystal.

“I welcome the expansion of the restaurant, which is not operated by Fiskars. However the application should not be put through as Part 8, I don’t know of any other business in the city that this would happen for. This application should go through the proper planning process.”
Cllr Mulligan said he was disappointed that the new Mall business committee had not been consulted during the process. “It is appalling that business people of high standing have made submissions, including a professional planner, and this was this was rushed through in 24 hours and before the Council in a week. I have reservations and think there should be further discussion.”
Cllr Pat Fitzgerald (SF) made the point that parking buses on the Mall was “taking” from the city centre’s “prestige street”, adding: “We need to be able to show off this area.”
District Manager Lar Power explained that there was nothing unusual in the Part 8 process being used. “The building is Council-owned, that’s why it is necessary. But the application was advertised and put on public display, people had an opportunity make their views known.”
Mr Power noted that this was a “modest extension that is not going to increase visitor numbers or generate additional traffic”.