A modular cardio-cath lab, capable of providing both diagnostic and follow-up interventional cardiac procedures is to be installed at University Hospital Waterford (UHW).
Making the announcement on Monday, a relieved and pleased Minister of State John Halligan (IA) said the lab, which will operate alongside the existing cath lab at UHW, will further reduce regional waiting lists for vital cardiac treatment. “It’s important to note that both the mobile lab and the modular lab are short-term solutions to address wait times in the South East whilst simultaneously demonstrating the demand for increased services,” said Minister Halligan. “The real goal always has been – and remains – a second permanent cath lab and the provision of 24/7 cardiac care at UHW.”
): According to Minister Halligan, Health Minister Simon Harris agrees with the argument which has been consistently put forward by Oireachtas members based in tge South East. Namely: “That there is merit in the proposal for a modular cath lab at UHW in order to address waiting times at the hospital, increase capacity to provide immediate access to the main cath lab for emergency patients presenting with heart attacks and provide a better service for the people of the region.
“Consequently, he has asked his Department to proceed without delay to engage with the HSE on the next steps in providing a modular lab. Minister Harris informs me that the timeframe for the development of modular builds as outlined by the HSE must include tendering, project design work, planning, commissioning and construction so it will take until next year to deliver the new building. However he has given me a commitment that funding for the lab, including staffing costs, will be ring-fenced in the 2019 budgetary Estimates and that work will begin immediately on the process to deliver it. ” Since the mobile cath lab was introduced last October, elective waiting list numbers and wait times have “significantly reduced,” according to the Minister.
“The total number of patients waiting in January 2017 was 670 but, by January 2018, this had been reduced to around 370. Whereas many patients were previously waiting up to 18 months for a diagnostic angiogram, now the majority of patients are waiting zero to three months.”TD David Cullinane (SF) described a modular lab as “a game changer which will significantly increase capacity at the hospital and allow for both diagnostic angiogram and intervention work to be done”. 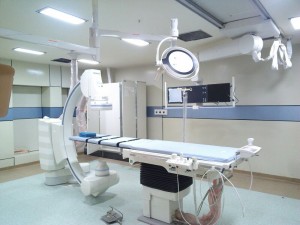 He added: ““Last year Waterford and Regional Oireachtas members embarked on a process of working collectively and in collaboration with the Minister for Health. We did so as this issue is bigger than party politics. Our only goal was to succeed in enhancing capacity at the hospital.”
These sentiments were echoed by Senator Paudie Coffey (FG) who acknowledged “the efforts made by my constituency colleagues on the cross-party South East Oireachtas Group which continues to fight for improved cardio services at UHW, including Minister of State John Halligan and deputies David Cullinane and Mary Butler (FF) and Senator Grace O’ Sullivan (GP).”
Senator Coffey added: “This is obviously not the final solution in terms of cardio services at our regional hospital, but it is a very important and significant step that could save lives.”
According to Deputy Mary Butler: “The Consultants based at UHW feel this proposed modular unit would greatly enhance the cardiac services they could offer to the public having one elective and one non elective lab.
“This current mobile lab will remain in place while tendering and project design will be carried out by the Department of Health. The finance for the new modular lab will be ring fenced in the 2019 budget according to Minister Halligan. This is something which I will be monitoring closely to ensure this commitment is delivered on.
“This is certainly a step in the right direction, it’s not 24/7 however it is the next step in expanding the current service. The current capacity demand mismatch cannot continue. Working with my Waterford Oireachtas colleagues in a constructive way has been a positive step to ensure the delivery of this vital unit. We will continue to work together to ensure that it is delivered.”
John Halligan noted: “The mobile lab is limited to use for diagnostic angiograms only and does not provide facilities for more complex procedures. Of the patients who received diagnostic angiograms, around 30 per cent require follow on procedures and the increased number of people who received a diagnosis in the mobile lab has hugely increased the pressure on capacity in the main cath lab. That’s why myself and other South East Oireachtas members have been working together to persuade Minister Harris of the merits in replacing the mobile lab with a modular lab that can cater for both diagnostic and interventional procedures.”
David Cullinane said this outcome “demonstrates the value of regional politicians working as one. I want to commend all local Oireachtas members and City and County Councillors who came together to get this over the line. This announcement is great news for cardiac patients and they must come first.”