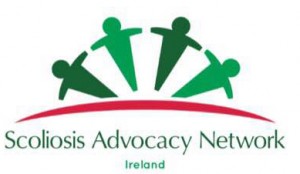 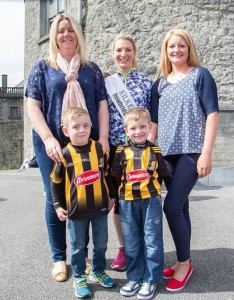 Darragh was diagnosed aged two, while Tommy was diagnosed before birth.
Their decision to establish the advocacy network came about as a result of their immense frustration over the long waiting lists for scoliosis surgeries.
“A child with scoliosis could be waiting up to two years for an initial consultation with a surgeon – that’s before needing surgery,” explained Claire.
Scoliosis is a disorder that causes an abnormal curve of the spine.
As it’s a progressive condition, it’s paramount that it’s treated as soon as possible.
As the spine curves, it causes the rib cage to rotate meaning that those with the condition may also suffer breathing problems, heart problems, endurance problems etc.
Claire and Michelle previously established a private support group but decided to form a public group in order to further highlight issues associated with scoliosis.
“Our main aim is to bring about change through a public platform. We realised that a lot of other parents didn’t have a voice so we set up the group to help other parents and to advocate on their behalf. A lot of parents are at their wits’ end because of the whole situation,” said Claire.
As well as lobbying politicians, the network aims to highlight the importance of simple supports such as increased information to help make the process of dealing with a diagnosis easier.
Addressing the issue of long waiting lists remains the primary concern of the network.
“At present there are around 180 children waiting for spinal surgery at Crumlin. That number doesn’t sound huge but Crumlin is only funded to do 58 surgeries per year,” explained Claire.
“Darragh was put on a waiting list in August 2015 and told his surgery would be in Spring. Now we’ve been told Summer. Some parents have been waiting two years for surgery and on the morning of the surgery they get a call to say it’s cancelled.”
Rolling theatre closures in Crumlin have also resulted in a huge number of surgeries being cancelled.
During the recent general election debates, the waiting lists for scoliosis surgeries were discussed and the issue has been highlighted on many current affairs programmes.
Claire and Michelle met with Minister for Health Leo Varadkar when he visited Kilkenny recently.
“He has made some progress in helping the situation. He sanctioned a new theatre for Crumlin but the theatre is no good without staff or equipment,” said Claire.
As a result of the lengthy waiting lists, scoliosis sufferers are seeing their condition further deteriorate, as Claire explained.
“In other countries, a curve of 50 degrees is recognised as standard for surgery, but in Ireland our children are literally being left until their spins are completely curved over,” she said.
“At present, Darragh’s curve is 70 degrees. He will possibly be left wait longer because there are other children who are even worse. They’re allowing all these children to become worse. It’s an ongoing disaster.”
She continued: “There’s no other option for us as there is no private facility for spinal surgery. Parents are left looking at their child’s quality of life deteriorating.”
Surgery also becomes riskier as the condition deteriorates, and there are additional concerns for children who have to wait such a long time for surgery.
Scoliosis can impact on day-to-day activities such as walking, running, and playing sport, but it can also impact detrimentally on self-confidence.
“For teenagers in particular they feel very different and feel as though they don’t fit in,” said Claire.
“They feel let down by the system and they feel as though nobody cares. Their mental health at that age is affected greatly.”
The aim of this weeks’ tractor run is to raise awareness of scoliosis and the Scoliosis Advocacy Network but also to raise funds for Straight Ahead CMRF Crumlin.
The Straight Ahead initiative operates on a voluntary basis, with administrative support from the CMRF, and provides surgery, support and medical equipment for children with orthopaedic conditions.
Surgeons perform operations pro-bono and the Chairman and Board give their time and expertise for free.
The aim is to take children that are time critical and whose health is deteriorating off the waiting lists.
Since September 2011, Straight Ahead has completed 50 life-changing surgeries for children who urgently require operations as a result of severe orthopaedic deformities.
All involved with the initiative provide services free of charge but there are costs involved such as rods which are very expensive, hence the need for fundraising.
Claire’s father Patrick Falconer along with Ned Delahunty and other members of the Mooncoin Vintage Club are staging the tractor run.
“We hope to use the event as a means to get the word out about what we do,” said Claire.
Tractors will meet at 10am, on Saturday, Apr 30th, at The Royal Oak Bar, Rathkieran and will depart at 11am sharp.
There will be music before the event so pop along and support this worthy cause.
For more information visit www.straightahead.ie or check out the Scoliosis Advocacy Network Facebook page. 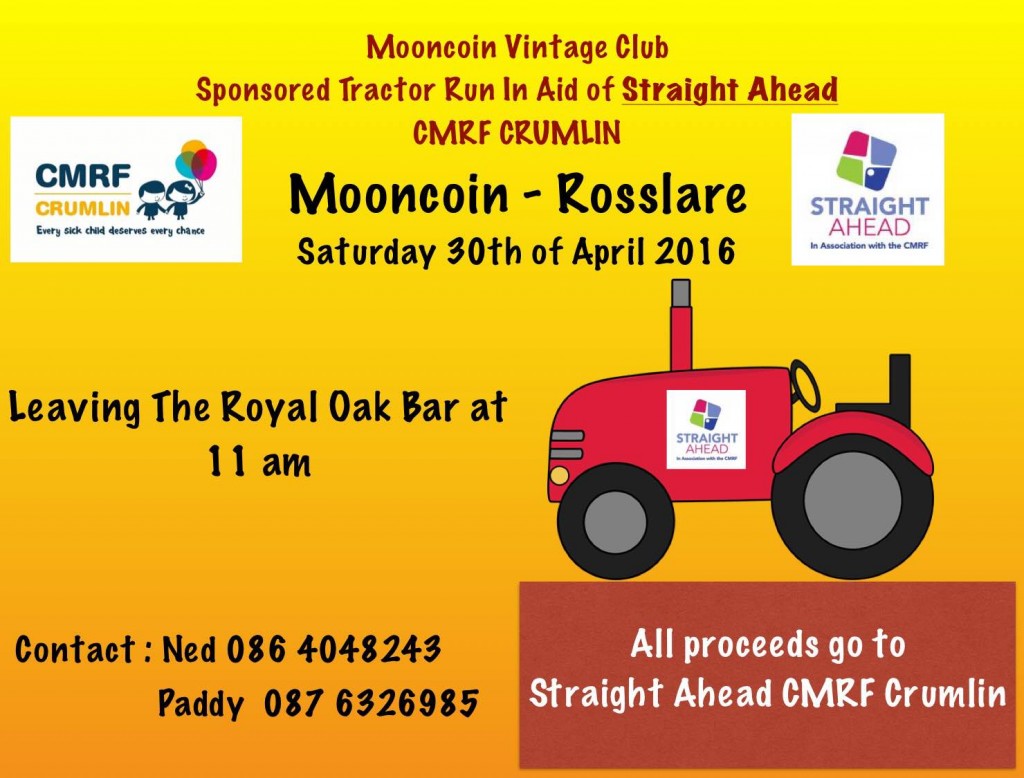