Under The Munster Microscope: Michael Garland 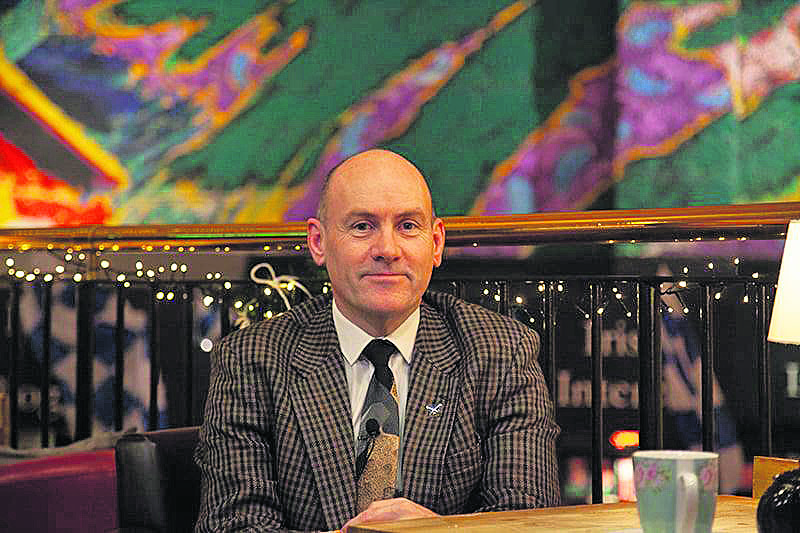 Although he is a proud native of Scotland, Michael Garland has enthusiastically made Waterford his home and has contributed to community life in the Déise in a variety of ways.

He has held various high-profile positions locally, including Director of Golf at Waterford Castle Hotel (his reason for coming to Waterford City) and CEO of Waterford Chamber. He is a founding member of the Waterford Business Group and recently assumed the role of Operations Manager for Tramore Amusement and Leisure Park.

Married to Oonagh, the couple are proud parents of Saoirse and Colm.

I grew up in a wee village called Pitlessie, which had around 300 inhabitants, in the beautiful Kingdom of Fife, in bonnie Scotland. Having been to college in Aberdeen and

Kirkcaldy, famous for linoleum, Adam Smith and ‘The Wealth of Nations’ and the darts player Jocky Wilson, I moved to London in 1987 to follow in the footsteps of Dick Whittington. I was not the brightest bulb in the chandelier, therefore I had to work very hard to get my exam results – an ethos that I continue to believe in. I never planned to be in Waterford for the last 21 years, but I am delighted that this place ended up as home. A great City and County with much to offer. Just a pity we are afraid to shout about it – it’s like we are Ireland’s best kept secret!

My family and in particular my Mum and Dad. I lost my father to MND in 1995 and despite losing him at such a young age, I know that he is constantly with me, guiding me through thick and thin. Would he be proud of me, his family and grandchildren? I certainly think so. Dad believed in hard work and as a secondary school teacher he rewarded the ethos of effort. He would often ignore some better players for school teams and instead pick less talented players who would work harder for the team. He hated prima donnas! Don’t we all. Mum has an addictive drive that is also on my genes. It is all or nothing with 100% commitment.

Find a career as a Civil Servant! Having been through a number of financial crises in the eighties and noughties, I perhaps should have found a sector with more financial security and of course a terrific gold-plated pension. However, being ‘pigeon-holed’ to one employer or job role would have been frustrating. I often joke that working for the state would be the easier option and yet the restrictions that brings would have driven me absolutely stark raving mad. You have to find a balance in life and the variety, throughout my career, has been exciting and rewarding. So, really my younger self did just fine routing a career and life path for me.

What’s your favourite piece of art (book, film, song, album etc.) and why?

I’m not a real arts person and I even whistle out of tune, so was never massively big into listening to music, apart from AD/DC of course. However, I do watch the odd film and there would be no surprise if I said one of my favourites is ‘Braveheart’. It is a great one to watch before a Calcutta Cup rugby match. Though historically inaccurate, it does raise the hairs on the back of your neck when Willie Wallace batters the living daylights out of the Auld Enemy. Something every Irish person can appreciate too!

Without doubt a Six Nations rugby weekend, watching Scotland v England at Murrayfield with pals and mates from across the UK and Ireland. And of course, a big Scottish win! A time to reminisce on our times living together in London, as young, free, single rugby playing men. It is great to get a gang back together after a long absence and shoot the breeze, so to speak.

My family without any doubt. As a Dad I am of course very proud of my two kids Saoirse and Colm. Both were born in Scotland, so there is at least a wee bit of ‘Braveheart’ in them. They are aged 24 and nearly 21, so really are young adults now. Both Oonagh and I hope that we can be the parents they wanted us to be and not the parents we think we should be. It’s tough being a parent and there is no rule book to follow. So, we both hope we are doing a good job. 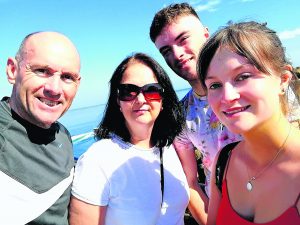 Believe me I have a few!!! I am naturally very, very competitive. Both with myself and with others. The bigger the challenge the more determined I become. I have another annoying trait, where I expect everyone to have the same attention to detail as myself.

I have a huge aversion to people who lie and are predominantly lazy. My Dad was exactly the same as a secondary school teacher, so I assume I inherited this gene directly from him. It never ceases to amaze me as to why some people ‘just don’t bother’.

I would have loved to have been a Formula 1 racing driver. My Mum’s Uncle Tommy raced against Jim Clarke, gave Jackie Stewart his first saloon racing car, is in the BRDC Hall of Fame, raced at Le Mans and I had the bug but not the talent or the money to follow that career path. My love of speed however, will always be with me.

Do you have regrets, or are you someone who looks forward?

No regrets. We drive our own bus and decide the routes we take. If you don’t like the road simply change direction and keep changing direction until you get to where you want to be. Just remember to throw off all the twats, from your bus along the way. Better still just don’t let them on your bus! I know that I am a positive thinker and perhaps at times too positive.

Tell me something about you that people might not know

I have a tattoo to commemorate Scotland’s last rugby Grand Slam victory in 1990. Sadly, I have not been able to add to it since – but there is always next year, as we Scottish fans have been so accustomed to saying. For my son Colm’s 21st we are getting new Dad and Son tattoos – ouch!

Waterford’s wonderful scenery. As a MAMIL (Cyclist) I see all of our countryside from a slower aspect and from the sea to the mountains (admittedly wee mountains compared to our ones on Scotland!). We have it all in Waterford and the potential of the whole area as a tourism destination is untapped and this once again is something we have to address and address very quickly. 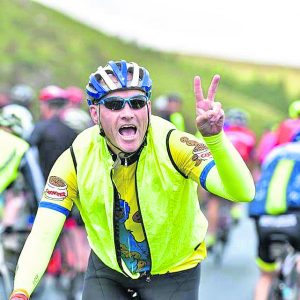 Michael admits to being a MAMIL (Middle Aged Man In Lycra!)

Though not religious by any stretch of the imagination, Oonagh and I would like to travel to Jerusalem. For me, just to see what all this religious fuss is about. You never know I might just be converted as well! The history of this place of conflict intrigues both of us and when it is safe to travel there (if it is ever safe) we will both go. I might even hire a bike when I get there.

Still here in Waterford. Though in a place where we ALL see a brighter future. Where we can ALL look forward to a larger slice of the Government Exchequer purse. A Waterford that we can ALL be proud and more positive towards. A place where we REALLY can work together, with the right people on the right committees, supporting local businesses and putting Waterford FIRST.