Under The Munster Microscope: Tom Power 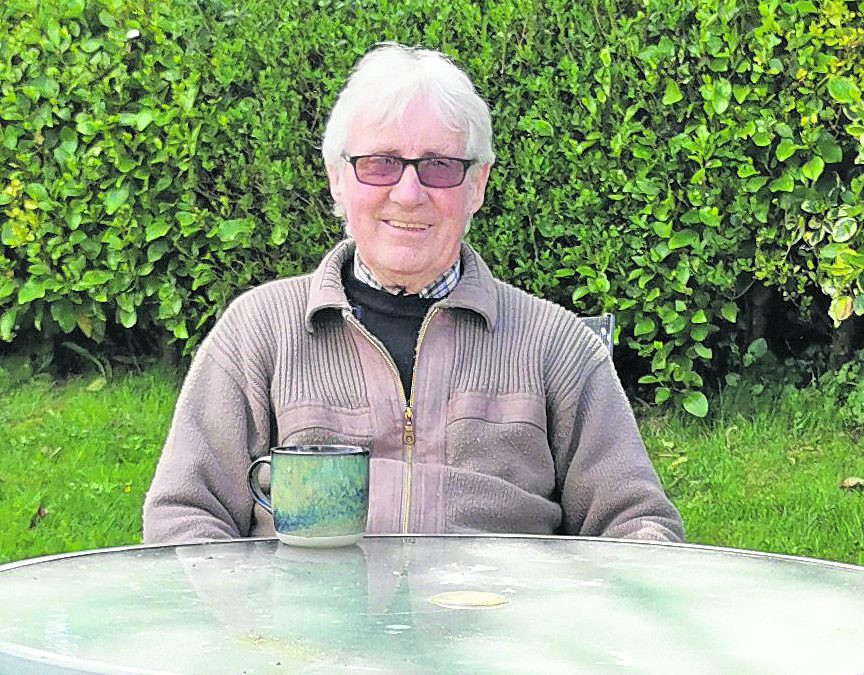 Tom Power from Kill is a talented author and poet whose work regularly features in The Munster Express. He has published four books and has penned numerous short stories and poems as well as two plays. His most recent publication, ‘Then, Now and Maybe Tomorrow’, was launched in March 2019. In his writing, Tom draws on his varied experiences including his upbringing in Mid County Waterford; his life as an Irish emigrant in London; and his work as a rural postman. His passion for Waterford is also clearly evident in his work. Married to Hannah, the couple have three sons and three grandchildren. Tom is Chair of the Michael Power Memorial Swim which is named in memory of his brother and is staged at Kilmurrin Cove on Christmas Day.

Growing up I was quiet, shy, with a lack of confidence in myself. I think a lot of children from the forties and fifties suffered from a lack of confidence, it kept a lot of us from achieving what we possibly could have achieved. The majority of us finished school at fourteen, and were afraid to put our head above the parapet, ‘who do you think you are?’ But finishing school at fourteen didn’t mean we stopped learning. Learning is a lifelong event. The forties and fifties in Ireland were a strange place. Children lived in fear of the guards, the priests, the teachers. We had Irish kicked into us in school. I’ll never forget Peig Sayers, although I have good memories of Padraic Colum and Wordsworth. I never thought back then that I would have my poems published in the local and national press and have them read on local and national radio; publish four books; and have two plays performed in our local theatre. If someone told me all that at fourteen I would think they were having a joke at my expense. It’s great to see the children of today so full of confidence. They can, and will, achieve their dreams.

Who would have been your greatest inspiration?

For poetry, Patrick Kavanagh. He proved to me that a person whose schooling finished at fourteen could achieve success as a poet and writer – that it wasn’t just for the elite and that poetry is possibly a gift. You can’t go to a career guidance teacher and say ‘I want to be a poet’. You are a poet or you’re not; it comes from within. The people I met in my varied working life inspired me. Starting at fourteen as a farm hand, then a stint planting the then fledgling Mount Congreve. A factory in London, a corporation depot in Hampstead, issuing material for roads and pavements. Six years as a library attendant In the Swiss Cottage Library, one day a week as curator in Keats House in Hampstead and six weeks living there one summer in the mid-sixties. Back to Ireland, Mount Congreve again. Roadstone, Kilmeaden Cheese Factory, and almost thirty years as a postman in Kilmacthomas. Different jobs, different people, different countries. I think people who emigrate have a broader outlook on life, you lose that parochial mindset. The people I have met and the work I have done have without doubt influenced my poetry and writing.

What piece of advice would you give your younger self?

I would advise myself to learn to play the piano. I could put music to my own lyrics, and not be depending on others. A lyric writer without music is like a bicycle without pedals, it’s all downhill. How can you relay a tune in your head to other people?

What’s your favourite piece of art (book, song, poem etc.) and why?

I think the first book I read was by Mark Twain, ‘Tom Sawyer and Huckleberry Finn’. That book gave me a love of reading for life. I like Walter Macken, J.P. Donleavy, John B Keane, Charles Dickens, and Thomas Hardy, to name just a few. In poetry, Kavanagh of course, Padraic Colum, Yeats, Wordsworth, Robert Frost, Keats and Emily Dickinson. Her line ‘Because I could not stop for death, he kindly stopped for me’ sums up the futility of life’s headlong rush. My song choice varies. I like good original songs. We have far too many copycats here, especially in country music. I like rock ‘n’ roll, good country, Irish ballads. The Beatles, The Moody Blues’ ‘Nights in White Satin’, Procol Harum’s ‘A Whiter Shade of Pale’, Leonard Coen, Dylan, and Sinatra. My favourite country song is ‘Sunday Morning Coming Down’. Kristofferson sums up the highs and lows of city life in that song. 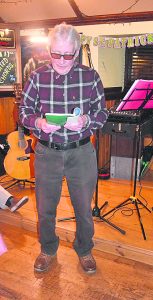 Tom speaking at the launch of ‘Then, Now and Maybe Tomorrow’.

Since retirement, my weekends are much the same as any other day. Walking and enjoying the scenery of the Copper Coast, swimming in summer. I’m going to buy a wetsuit so my swimming sessions will increase. I like gardening, setting vegetables and a few early potatoes. Before Covid, a pint and a chat on Friday nights in the Thatch Bar in Kill, someone might say something that might inspire a poem. Listening to a good band there on Saturday nights. Those Friday and Saturday nights separated the weekend from the weekdays. I miss the company and the banter. Now, every day is the same. Sometimes I have to ask Hannah, ‘what day is it?’

My wife, Hannah, my family and my grandchildren, Michael, Heather, and Alana. 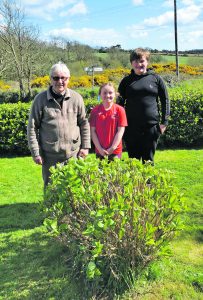 Tom with grandchildren Michael and Heather.

I’ll have to ask a few friends and neighbours that one. I’m sure they all have a long list.

Long ad breaks on television, politicians who fudge and won’t answer questions, dire copies of good songs, referees who won’t whistle for a blatant foul, and a badly pulled pint.

Without doubt, I would prevent our Civil War happening. Apart from our manmade Famine, our Civil War was the worst disaster to affect our country and it was all in vain as we still only have twenty-six counties.

It kept us in the dark for almost seventy years and confined us to a church dominated society, and it still affects our politics today.

I always had a hankering to be a tour guide in Ireland.  Explaining the history of our historical buildings and castles, commenting on our scenery, quoting some of our poets and writers, meeting people from different countries – what a way to tour Ireland.

I live in rural Ireland, so people know more about me than I do. They may not know that I have a letter from former American President Ronald Reagan. When he was elected President, I sent him my poem ‘Returning’. I put it in an envelope and addressed it to President Ronald Reagan, The White House, Washington D.C. To my surprise, some weeks later I got a reply on White House paper, with the official stamp embossed on it, thanking me for the poem and how much he and his wife Nancy enjoyed it. I still have it somewhere in my unique filing system.

Do you have any regrets, or are you someone who looks forward?

I think the majority of people have regrets of some sort, and probably would put things right if they could, but we can’t go back. We all make mistakes in life, but we must learn from them, and not repeat them, move on as best we can, try and leave the past behind, and embrace the future.

Our wonderful Copper Coast, some of the best scenery in Ireland. Our rivers, valleys mountains and sea. Our new Greenway. Our unique City, the oldest one in Ireland, steeped in history, the first place to fly the Tricolour. Our wonderful villages. Our county town Dungarvan; to sit and have a coffee in Grattan Square, and watch the world go by. And our friendly people, well most of them are friendly, you’ll find the odd grouch wherever you go.

If you could travel anywhere in the world what would be your destination?

I am a lover of nature. I always take the natural world above manmade things so, top of my list would be, the Grand Canyon and the Niagara Falls.

I hope to be set free again, driving to Waterford, Tramore, Kilmacthomas, Dungarvan, enjoy a meal and a coffee. Be back on that high stool enjoying a pint and good music. Although, with the state of world, Covid, and my age, to be still alive will be an achievement in itself.