Home » All Front Page News » My Uncle, the GPO & The Big Fellow

My Uncle, the GPO & The Big Fellow

Dunmore East resident recalls Gearóid O’Sullivan’s role in the Easter Rising
“England has been left in possession not only of the Soil of Ireland, with all that grows and lives thereon, to her own use, but in possession of the world’s ear also. She may pour into it what tale she will: and all mankind will believe her.” – ‘Jail Journal’ by John Mitchel
Michael McSweeney has happily lived in Dunmore East for over 60 years. Despite his adopted Waterfordian status, the octogenarian’s accent still carries a West Cork lilt – you can take the man out of Skibbereen but – well, you know how the rest goes.
On a glorious Thursday afternoon last, with the Lower Village basking in sunlight, Michael, in the company of his wife Una and daughter Ciara (a teacher at Ballygunner National School), relayed to me the story of one Gearóid O’Sullivan.
And I could scarcely have been more taken aback with the significance of this man and the role he played during the Insurrection of a century ago. 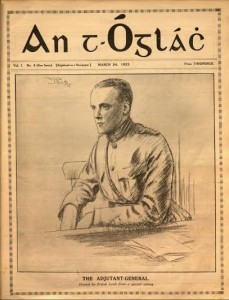 A portrait of Gearóid O’Sullivan which featured on the cover on ‘An tÓglach’, a publication of the Irish Army, on March 24th, 1923 (priced Two Pence). O’Sullivan raised the Tricolour on the GPO on Easter Monday, 1916.

“Have a look at this,” says Ciara, handing me a book her father studied when in Fifth Class, great chunks of which he can still recite off by heart to this day.
This copy of John Mitchel’s Jail Journal is positively Dickensian to the touch; frayed, with some loose pages and a spine drifting away from its binding given its age, yet it’s all the more fulsome in character because of this.
I turn to its immediate pages, where in ‘Sean Ghaeilge’, a style of writing I was fortunate to learn during my own school days, the book’s original owner had marked his territory, three years before he took to the roof of Dublin’s GPO, to raise the Tricolour, on Easter Monday, 1916.
“Gearóid Ó Suileabáin”, he wrote, with a dot marked over the ‘b’ since there was no ‘h’ in printed Irish at the time), “Grianán na nGaedal, Sráid Mont Seóid, Ác Cliat, 6.IX.13”.*
To briefly leaf through a precious possession of the man who raised our national colours that momentous Monday on Sackville Street, connected me – albeit only for a few minutes – with Gearóid O’Sullivan, who was also the youngest Volunteer to serve in the GPO during the Rising. Touching history in such a manner was genuinely humbling.
“Himself and Michael Collins were very close,” said Michael. “Sure they must have virtually lived together for the better part of five to six years and worked very well together. They were great, great friends, and they’d have seen a lot of things together, a lot of action.”
That action extended to the GPO on Easter Monday, when both he and Collins, as noted by celebrated author Frank O’Connor, “spent the night in the corridor outside the office in which (Sean) MacDermott, (Joseph Mary) Plunkett and (Thomas) Clarke were catching a rest. They are hard-boiled eggs, and Collins growled at the cackling women who might break the leaders’ sleep.”
O’Sullivan, a native of Skibbereen, had qualified as a primary school teacher in 1912 and was initially appointed to Saint Paul’s National School in Phibsboro, to which Michael added: “He was there right up to the Rising; I feel he wanted to be close to the action – and when Collins came back to Dublin from London, before the Rising, they soon got to know each other very well and struck up a great friendship.”
Frank O’Connor captured the essence of that friendship in his magnificent tome, ‘The Big Fellow’, the book Liam Neeson credited in helping him get inside the head of Michael Collins when shooting the Neil Jordan-directed movie. He wrote: “But it was really only when the day’s work was over and (when Collins) was alone with the gang that his temperament got full play. Then he pushed the sofa at O’Sullivan. O’Sullivan pushed it back. O’Connor lent a hand. (Liam) Tobin joined in, and the senior officers of the Irish Republican Army rolled about the floor. Collins became again the young savage of Stafford Gaol. All-in wrestling did not bear comparison, and a rugby scrum was only child’s play to it. A ‘bit of ear’ was the goal.”
Michael flashed back to his Uncle’s recollection of Easter Monday morning when O’Sullivan and Collins gathered with the Volunteers outside Liberty Hall, ignoring Eoin MacNeill’s last minute order to call off a rebellion whose planning, wrote O’Connor was “outstanding for muddle, plot and counterplot, command and countermand”. 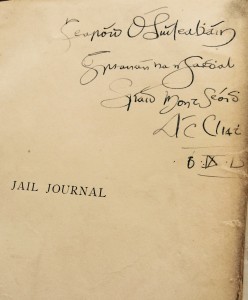 The signature of Gearóid O’Sullivan on the copy of John Mitchel’s Jail Journal which he handed down to his nephew, Dunmore East resident Michael McSweeney.

O’Sullivan was appointed aide de camp to Sean MacDermott, with staff captain Collins charged with the same brief with respect to Joseph Plunkett. And from there, they marched to the GPO.
MacDermott was handed the Tricolour and instructed to ensure its unfurling was left in young, capable hands (as was also the case with Eamon Bulfin, who raised the ‘Irish Republic’ flag) and he in turn handed it to his aide de camp, instructing O’Sullivan, branded “the young fella” by Patrick Pearse, to raise the flag.
“Get someone to cover you,” was MacDermott’s order as Gearóid journeyed onto the roof and into a relatively under-documented place in Irish history.
“The time came to carry out the order,” Michael continued, “and as he was running the flag up the pole, the Volunteer who was covering him was shot dead”.
By the end of Easter Week, with Sackville Street a smouldering wreck, the GPO reduced to a charcoaled skeleton and following Pearse’s unconditional surrender, both flagbearers, along with the signatories of the Proclamation, were sentenced to death.
O’Sullivan shared a cell with MacDermott in Kilmainham, and as his superior was taken from the cell, bound for the Stonebreaker’s Yard for his execution, MacDermott bade farewell, stating: “Goodbye, Gearóid, we’ll meet above.”
However, in the wake of the revulsion which greeted the executions of 16 Volunteers, including the seven signatories, a further 75 jailed insurgents, including O’Sullivan, saw their death sentences commuted to imprisonment (Frongoch in his case), from where he was released in December 1916.
He returned home and in 1917, he took up a post as Professor of Languages at Knockbeg College in Carlow, and retained his involvement in the Volunteers, despite a further prison term following a “seditious speech” he delivered in his native Skibb.
Come 1919, summoned to Dublin by his comrade Michael Collins. O’Sullivan was appointed as Adjutant General of the Volunteers, and also acted as a commanding officer of the Dublin Brigade, from whose ranks Collins picked his famous ‘Squad’.
Though he opposed the Treaty, and was by then a sitting TD for Carlow/Kilkenny (first elected in 1919), Gearóid O’Sullivan didn’t break ranks with ‘The Big Fellow’ and their friendship remained a constant.
During the Civil War, Gearóid O’Sullivan – whom Michael believes also travelled to London with Collins during the Treaty discussions – served as Adjutant General of the Free State Army and in October 1922, he married Maud Kiernan, sister of Kitty Kiernan. Their nuptials came two months after the murder of Collins at Béal na mBláth; the Kiernan sisters had planned a double wedding. But alas that was not to be, with the grieving Kitty dressed all in black (as was the custom at the time) at the subsequent ceremony.
Within months, O’Sullivan had left the Army to pursue careers as a teacher, politician and barrister (the latter in which he qualified in 1939).
As a Cumman na nGaedhael TD, he succeeded the assassinated Kevin O’Higgins in Laois/Offaly following a by-election in 1927 and later served three terms as a Dublin County TD, while also serving in the Seanad.
In an eerie historical footnote, Gearóid O’Sullivan died on Good Friday, March 25th 1948 and received a State Funeral on Easter Monday, 32 years after he raised the Tricolour on the GPO that his cortege passed en route to Glasnevin.
Draped over his coffin was the same Tricolour that had draped the coffin of Michael Collins, Parnell’s successor as our uncrowned king, some 26 years previously. Symbolic symmetry, if you will. And within nine months, the Republic of Ireland came into being.
“He was great friends with Collins, he achieved a lot during his life and maybe there’s not been enough made of what he did,” said Michael. “But we remember him, and that means something. That counts.” Indeed it does, Mick. Indeed it does.
* To the best of my knowledge, the address printed by Gearóid O’Sullivan in his copy of John Mitchel’s Jail Journal referred to the Munster Private Hotel at Number 44, Mountjoy Square, a haunt frequented by Michael Collins and many other Volunteers at the time.