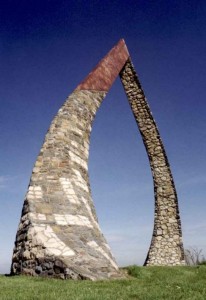 A captivating landmark at Newrath Roundabout was mooted at last week's meeting of the Piltown Municipal District, with a circular issued to Councillors featuring art installations including David F Wilson's Livingston Landmark in Scotland

Kilkenny County Council is committed to an overdue enhancement of the approach into Waterford city at Newrath and Sallypark, which it has identified as the ‘gateway route to the gateway city’.
In a circular issued at last Wednesday’s Piltown Municipal District meeting at Ferrybank, the Council stated: “The roundabout at Newrath is the arrival point for visitors to Ferrybank and Waterford but lacks a sense of arrival. With the abundance of new roads and junctions, the sense of place which motorists would have had due to local landmarks and features has now drastically changed.
“It is hoped that the creation of a large land mark feature marking the gateway to Waterford could be placed on the Newrath Roundabout helping to enhance this sense of place and arrival to the city and Ferrybank.”
However, as the circular notes, the Ferrybank Area Office which is responsible for the maintenance of the Sallypark and Old Newrath Road areas, “has no specific budget for parks/amenity relayed activities”.
Contrast that with the Kilkenny City budget of €700,000-plus “for the parks crew and nursery operations”.
The circular, prepared by Council official Claire Goodwin, adds that any such landmark feature, which would in all likelihood necessitate an artist’s competition for the selection of the appropriate installation, would probably cost between €100,000 and €150,000.
South Kilkenny Councillors were told that “it would be reasonable to suggest even a fraction of that amount be put towards similar projects in the second largest urban area in the county.
“With even a modest budget of 10% of what the city currently receives, a lot could be achieved on approach roads, in green areas, urban tree management and estate enhancement.”
The lack of signage on the major approaches into Waterford is not exclusively an issue which Kilkenny County Council has to address, although it has been prominent in its absence from both the Newrath and Slieverue/Ferrybank approaches for many years.
As Meetings Administrator Anne Maria Walsh noted at last Wednesday’s meeting, “a budget has to be found if these works are to be brought about”, with Councillor Tomás Breathnach (Lab) stating that “each Municipal District in the Council ought to have its own budget for matters such as this”.
He added: “South Kilkenny is the gateway to Waterford city and it’s clear that an enhancement of the approaches, including Newrath is required, and would prove most welcome…
“We have seen what was achieved at Plunkett Station of late, as part of the City in Bloom initiative, and those responsible for it deserve great credit for adding a welcome splash of colour on the approach into the city, so, while putting larger, admirable projects to one side, I feel it’s clear that we could do a great deal without incurring a significant expense.”
Cllr Breathnach also referred to a €50,000 discretionary fund ‘kitty’ which is at the Municipal District’s disposal but stressed that establishing a separate parks budget was worth pursuing.
Cllr Pat Dunphy (FG) told the meeting that the Municipal District has agreed with Waterford Metropolitan District Councillors to tidy up the approaches “a bit and make them more presentable” but that such works didn’t require what he described as “bells and whistles”. He added: “I feel a bit by bit approach to this is the best course of action for us to pursue”.
Cllr Dunphy suggested seeking sponsorship for some of the approach roundabouts but added that he “wouldn’t be happy if Parks were spending all their money in the city alone”.
Cllr Melissa O’Neill (Ind) suggested that further enhancement of the approaches might be among the activities which a new Tidy Towns initiative in Ferrybank may wish to engage in as part of its plans.
Cllr Eamon Aylward (FF) called for the Plenary Council body “to match or double” whatever monies the Municipal District may be able to put together, “but we know it can’t be done overnight…you’re probably looking at a three to four-year job”.
“We have to start somewhere and I feel we’ve made a start today,” said District Chairperson Ger Frisby (FF), “but this is also going to require Waterford to act on things from their side too…there are smaller scale things which we can get to work on straight away, and we will have to examine whatever funding streams we may be able to tap into in due course”.
Ms Goodwin’s circular estimates that:
> Establishing 1100 metres of hedging at Sallypark, including newly top soiled and seeded grass verges would cost €17,500,
> Powerwashing the wall from Sallypark to Newrath Roundabout, as well as planting climbers and other topsoil requirements has been priced at €8,500, while
> New hedging to the rear of the existing fence at Newrath would run for 1500 metres, along with further topsoil requirements estimated at €23,000.