The chair of the Irish Nurses And Midwives Organisation’s (INMO) strike committee at University Hospital Waterford (UHW) has thanked patients (and their relatives) for the understanding shown during last Wednesday’s industrial stoppage.
Mary Donnellan, a Clinical Nurse Manager at UHW’s Emergency Department said that she and her colleagues frequently find themselves apologising to patients given their ongoing understaffing levels. “We’re apologising because we have to put patients on corridors on trolleys when there are no cubicles available. Last week, one patient whom I had to bring out onto a corridor told me that if she was in jail, she’d be nearer to a bathroom, that she’d have easier access to toilet facilities or a commode than she had on our corridor. And that’s just shocking.” 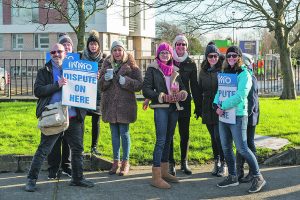 Ms Donnellan said that last Wednesday’s industrial action, only the second time in the INMO’s 100 years that members had taken such national action, was part of the organisation’s attempt to address nursing’s ongoing recruitment and retention problem.
“Even though we’re not the cause of the problem, we want to be able to look after patients safely and we’re out here looking for pay parity with other professionals who work alongside us who also do a four-year degree in college, so we want to be paid equally to them, and we want to be treated as equals.” Did Mary Donnellan find it particularly disappointing that the INMO felt it had no choice but to take such an action given Taoiseach Leo Varadkar’s medical training and experience?
“Well, the nurses are very angry that the Government hasn’t stepped up to the mark and resolved this dispute in any shape or form. They haven’t, I think, put any proposals on the table to us. Mr Varadkar (speaking on Tuesday last) said he had to look after the taxpayers. Well, we are taxpayers as well and so are all the patients that we apologise to every day for the poor circumstances that we’ve been left to nurse them in. This is about safely looking after the sick citizens in our country and that’s why we’re out here…the sick people that we look after have been so understanding. They come into a very difficult situation, they’re feeling unwell, they’re often frail and elderly, it’s difficult and we thank them for their support. This is difficult for everybody.”
Meanwhile, Fianna Fáil TD Mary Butler believes the Government must “start listening to what nurses are telling them” if further strikes are to be avoided. “I’ve been talking to nurses around the county and they are at their wits’ end,” she said. “None of them wanted to be on the picket line (last Wednesday, they are deeply dedicated to their patients, but they feel they’ve been left with no other option.”They are trying to provide professional care without the necessary support. The nursing profession has changed radically over recent years yet nurses and midwives are still the lowest paid – core salary – graduate professionals in the health service.“The Government left it too late to avoid last Wednesday’s strike but it could still prevent the further five days of threatened action if it wants to. The Government needs to start listening to what the INMO are telling them and engage meaningfully with the nurses.”
Management at UHW has advised in relation to the impact of today’s second day of INMO industrial action on patients and services.
In a statement, Management said: “All Out Patient, Inpatient and Day Surgery appointments at UHW will be cancelled and the Injury Unit will be closed. In relation to Community Healthcare services, routine community nursing services and health centre nurse clinics will be cancelled. Public day centres and day hospitals for older people or people with disabilities will close. All planned admissions, including respite and rehabilitation, to public community nursing units and specified centres for people with intellectual disability will be cancelled.
Management at UHW request that people only attend for emergency services if absolutely essential. Any updates on patient services will be notified via the media, on social and will also be posted on the HSE website. Management at UHW wishes to apologise to all those patients and family members are affected by this action.” As went to press, Health Minister Simon Harris and his Finance counterpart Paschal Donohue stated their disappointment with this week’s further strike action. “The Government has always listened to the concerns expressed by nurses in relation to working conditions and job satisfaction as well as the patient experience,” read a joint statement. “The Ministers continue to be willing to engage in talks on the range of workplace related issues other than pay to try to resolve the dispute. This initiative could focus on the contribution and arrangements for the further roll out of the Safe Staffing Framework to improve staff and patient outcomes and reduce reliance on agency staffing in our hospitals. In addition, this engagement would encompass other relevant organisational issues appropriate to supporting quality and efficiency in the provision of patient service delivery in an integrated way.” Further strike action is also planned for this Thursday, February 7th