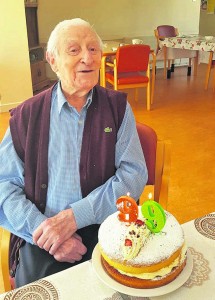 A special occasion was celebrated at Dunabbey House, Dungarvan last week when resident Paddy Mooney turned 99.
Born in Dunabrattin, Annestown on May 4th 1921, Paddy was aged eight before he started school because of ill health.
However, health problems certainly didn’t hold him back as he went on to enjoy an accomplished life.
Still hale and hearty, Paddy now resides in Dunabbey House where staff marked his birthday last week while adhering to social distancing guidelines.
In his youth, Paddy had a thirst for adventure and joined the Royal Air Force (RAF) in 1943, training as a flight engineer in Blackpool.
His time with the RAF brought him to many far flung destinations including Egypt, Palestine and Iraq.
Paddy, who flew on Lancaster Bombers, said: “I was never frightened of flying – never frightened of crashing, being shot down or anything like that. I loved the sounds of the planes revving up and the power of the engines always gave me real buzz.”
Paddy went on to enjoy varied jobs, including working with a leading tailor at Boyd Cooper in Mayfair, London.
In 1953 he departed for Australia and had varied jobs including at Vauxhaull Motors; in the building trade; as a truck driver; and working for a wealthy Swede who owned a large ranch.
After returning to Waterford in the sixties, he purchased a pub in Ballylaneen near Kilmacthomas which he developed into a well-known and hugely popular music venue.
‘The Bush Inn’, a particularly apt name given his time in Australia, became one of the first pub cabaret venues in the South-East and revellers travelled from far and wide.
It quickly gained a reputation for attracting popular performers such as the Dublin City Ramblers, Eileen Reid and, Paddy’s favourite, Cork based band The Antelopes.
He recalls nights when up to 500 people were in attendance and the ‘full house’ signs were often displayed as early as half seven.
Paddy fondly remembers the great local characters but admits he didn’t actually enjoy the pub lifestyle. However, he soon found a new passion.
On a visit to see his son who worked as a butler at Mount Congreve, fate brought Paddy down a new path and he went on to enjoy over 30 years working at the world renowned gardens  – a role which he considers to be his favourite job.
Last year, a new rhododendron variety at Mount Congreve was named Rhododendron Paddy Mooney and planted in his honour.
Looking back on his long and accomplished life, Paddy says: “As the great song goes, I have no regrets!”