A man whose house was petrol bombed in Ardmore Park in the early hours of Saturday morning was pleading with Waterford City & County Council for emergency accommodation as this newspaper went to press.
The man, whom we’re not naming given the sensitivity of the incident at hand, spoke to The Munster Express outside Council offices on Bailey’s New Street on Monday afternoon, telling us he was “struggling” to comprehend the events of the past week. 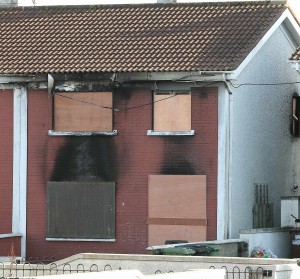 The fire damaged property at Ardmore Park which was petrol bombed early on Saturday morning.

“I’d not been sleeping very much before Saturday night as it was,” he said. “But I was actually getting my first bit of sleep in days when I heard this huge bang downstairs. And the house is destroyed after it. Everything we have is now in cinders. My head is scattered trying to make out what happened when – it’s been very hard to take it all in. And now we’ve got no home.”
An alleged abduction attempt of a person connected to the family occurred early last week, which was followed by threats to the household in the days leading up to the petrol bomb attack.
It’s understood that the person subject to the alleged abduction attempt (which involved three men wearing balaclavas) has not been seen in Waterford for almost a week. 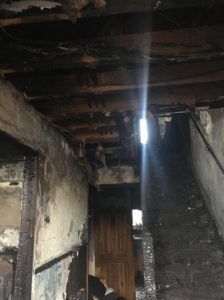 The gutted interior of the property

A few days later, a ‘messenger’ came to the householder’s front door and advised the man to get his wife and children out of the house.
“It was made clear that one way or another, someone was going to get it,” said the man, who had lived at Ardmore Park with his partner, two sons and two stepdaughters for four years. “I’m all out of tears – I’m all out of everything” said the man, whose family have lived in Waterford since the 1980s. “I can’t have my small kids growing up in fear.”
Waterford City & County Council was not in a position to comment on the matter of potential emergency accommodation for the family when we went to press.
For the full text of this story see this week’s print edition of The Munster Express
Photos: Noel Browne