Ronan O Brien Reports (Executive, Southern Region CIF)
The Construction Industry Federation (CIF) South East Branch warmly welcomed last Friday’s announcement of the National Planning Framework (‘Project Ireland 2040’) and the National Development Plan 2018-2027.
Under the National Planning Framework (NPF) Waterford is designated as an urban centre for expansion, meaning the County will get extra attention when it comes to infrastructure investment. The NPF could represent a game-changer for Waterford and the South East.
It will help develop the regional economy in the South East that can counter-balance the Irish economy’s overdependence on the greater Dublin area.
€2bn has been allocated to the Urban Regeneration and Development Fund in which Waterford Council will be able to acquire the €63.4m that will be required to make the North Quays SDZ regeneration project a reality including a new bridge across the Suir.
This is another significant step to realising a hugely important development for Waterford and the South East.
This multimillion euro investment at the North Quays along with the development of the Michael Street shopping complex and the Ard Ri Hotel will help to transform Waterford City and ensure that the City attracts further investment in the future. An Economic Appraisal prepared by Indecon Economic Consultants shows the combined investment in these three Waterford sites will reach €562 Million.
Also mentioned in the plans are:
• The N24 Waterford to Cahir and the N25 Waterford to Glenmore road projects will be progressed through pre-appraisal and early planning during 2018.
• Waterford Airport will receive continued exchequer support planned under the Regional Airports Programme.
• Continuing investment to further improve the quality of port facilities, particularly those in the South-East such as Rosslare and the Port of Waterford given their role in maintaining transportation linkages with crucial EU markets.
• To grow the population of Waterford (City and Suburbs from the current figure of 54,000 to 81,000 by 2040
The predicted population growth means that thousands of new homes will be required to be built in Waterford. This in turn will lead to the creation of many jobs in the construction of these new residential units. 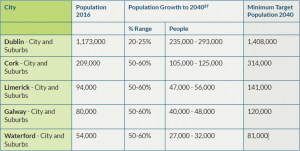 The North Quays development alone will see over a thousand direct construction jobs created throughout the project. For the last two years construction companies have been hiring an additional 1,000 workers per month on average in Ireland. Young people and their parents in the South East can view construction as a viable career option as there is a clear pipeline of work.
The Southern Regional Assembly (located in O’Connell Street in Waterford) will be tasked with ensuring the principles of the NPF are adopted by the regions Local Authorities in their future development plans
The establishment of the Construction Sector Group within the National Development Plan will help address the challenges to the delivery of the promised infrastructure investment in Waterford under the plans and ensure they become a reality.