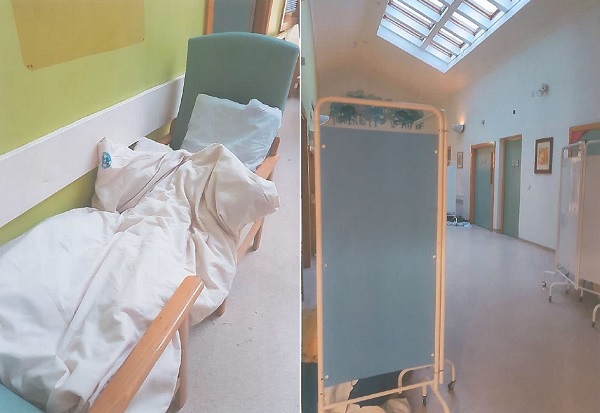 • Commission may rescind unit’s registration to provide mental health care
• ‘Deplorable’ conditions have been highlighted for almost two years
Eoghan Dalton Reports
Conditions at University Hospital Waterford’s psychiatry unit were laid bare last week, putting the facilities under the national spotlight once again. Leaked photos appeared to show patients having to sleep on chairs or the floor at the overcrowded department of psychiatry. A protest regarding the poor conditions in the unit is to take place this Friday, November 8 at the hospital.The Mental Health Commission will also meet in the coming weeks to decide on whether the psychiatric unit at UHW will be permitted to carry on as an approved facility for mental health care.

The Mental Health Commission said “significant improvements” need to happen to allow the unit continue to operate. 54 residents were being treated in the unit on the most recent Bank Holiday weekend, despite the department being registered to care for no more than 44 residents. Five of those residents, due to lack of space, were being forced to sleep in chairs, said the Commission. “This is an absolutely unacceptable situation, and one which we are approaching with the utmost of seriousness,” said Chief Executive of the Mental Health Commission, John Farrelly.
In a statement, released Friday evening, Mr Farrelly said the Commission had raised concerns on several occasions: “An initial notice outlining its ongoing concerns regarding bed capacity following an unannounced inspection at the same unit was sent in May 2019, and a Regulatory Compliance Meeting with the senior HSE officials was facilitated on 3 July 2019 to discuss the Commission’s serious worries about the recurrent issue, and the plans being put in place to address it.”
“The Commission has engaged with the HSE at the highest level, organising a meeting with David Walsh, National Director, Community Operations to discern how the HSE plans to implement effective governance and management in DOP Waterford in order to mitigate the issue at hand.”
The overcrowding during the Bank Holiday weekend was a “contributing factor” in the assaults of four staff, according to the chairwoman of the Waterford branch of the Psychiatric Nursing Association (PNA). “Our members believe the overcrowding leads to the increased instances of assault,” stated Leish Caulfield.
“As a union we went into industrial action 22 month ago on the issue of overcrowding. We thought it would have resolved issues but we hit an all-time high last weekend.
‘Embarrassing’
“There are no beds, no personal space, no personal dignity really. It increases the volatility within the unit. Overcrowding increases volatility.”We show patients to where to sleep and it might only be two chairs pushed together or a duvet for the floor. That’s their bed – it’s embarrassing.”
In a statement, the HSE said: “We acknowledge that there can, at times, be instances of overcapacity in the Department of Psychiatry and we apologise to any patient affected by these issues.“This was particularly the case over the last week where the unit had to deal with an unusually high number of involuntary referrals.”
According to figures recorded by the PNA, recent months have seen the department over subscribed for more than 20 days each month.“Psychiatric departments are obliged to admit such patients in the interests of their own safety, notwithstanding capacity to do so,” continued the HSE statement.“Where overcapacity does occur additional measures, including increased staffing and alternative external placement are applied. We have deployed these measures to the fullest extent possible in recent days.”However, said Ms Caulfield, last Friday saw staff unable to begin work for up to half an hour as staff had to be redeployed from other areas.
“They are stripping one area in the community resources to redeploy to the acute unit and then putting pressure on the community resources. It’s robbing Peter to pay Paul.”On Friday morning there were three patients who went without beds in the unit.Deputy David Cullinane (SF) noted an earlier Mental Health Commission report which found that residents’ general health needs were not monitored.”Words are one thing; we now have photographic evidence revealing a unit that is operating under conditions that would make a Victorian workhouse blush.
“The staff are not to blame here; they are operating under incredible stress and distress. Both the Minister and the HSE know that is about funding and resources. Yet, despite this, they refuse to do anything about it.”
He said he would be putting a motion down in the Dáil about the issue this week.
Meanwhile TD Mary Butler (FF) said the overcrowding was “deplorable”.“Only last month, the Mental Health Commission revealed a 57% compliance rate at the unit and outlined serious concerns with children being admitted to adult units, physical examinations, staffing issues and the use of physical restraint.
“These are vulnerable patients in need of special supports, but under Fine Gael their treatment has been vastly diminished. Our system is almost beyond breaking point and the Health Minister has no plan.